Take yourself on a photographic adventure

What is a Safari?

Safari is actually a Swahili word meaning journey, “The caravan and equipment of a hunting expedition especially in eastern Africa”

But other words can mean a safari too – exploration, expedition, adventure, wilderness, animals and birds. So it’s time to go on an adventure.

Why go on safari?

While a few lucky people are off enjoying the Annual BootCamp Photo Safari in Africa, everyone else can go on their own adventure too. It’s such a fun theme learning to photograph wildlife. You get to go outdoors and go on an adventure, even if it’s exploring what’s available in your own local area. 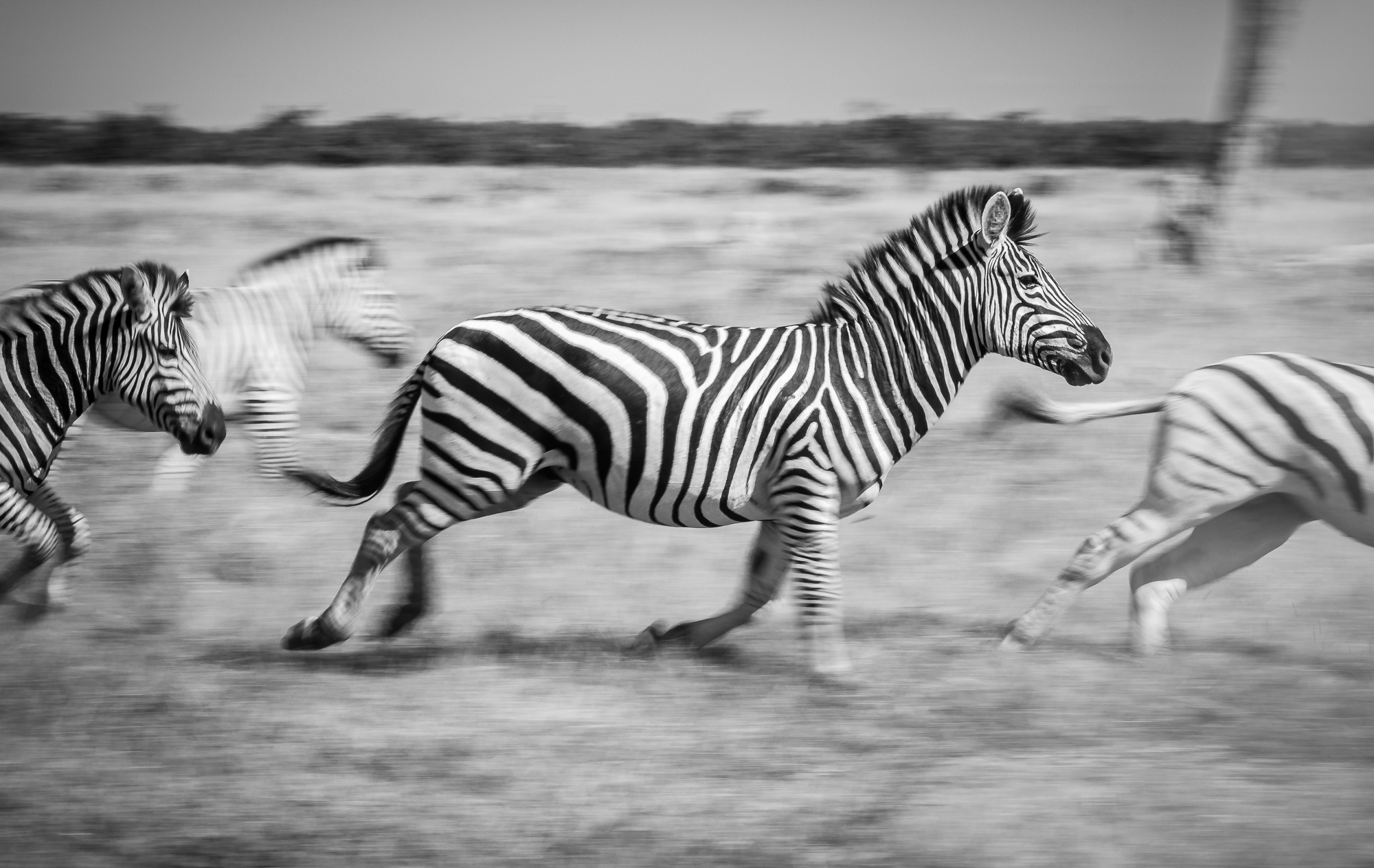 Photographed this image in Botswana on my annual BootCamp Safari where I get to share the amazing African experience with other photographers from around the world. I submitted this image into this BootCamp Challenge because I set myself and extra mini-challenge one morning around a water hole – to use panning and a relatively slow shutter speed (1/60 sec on 200mm lens) to show movement in my shot. What do you think? Brent 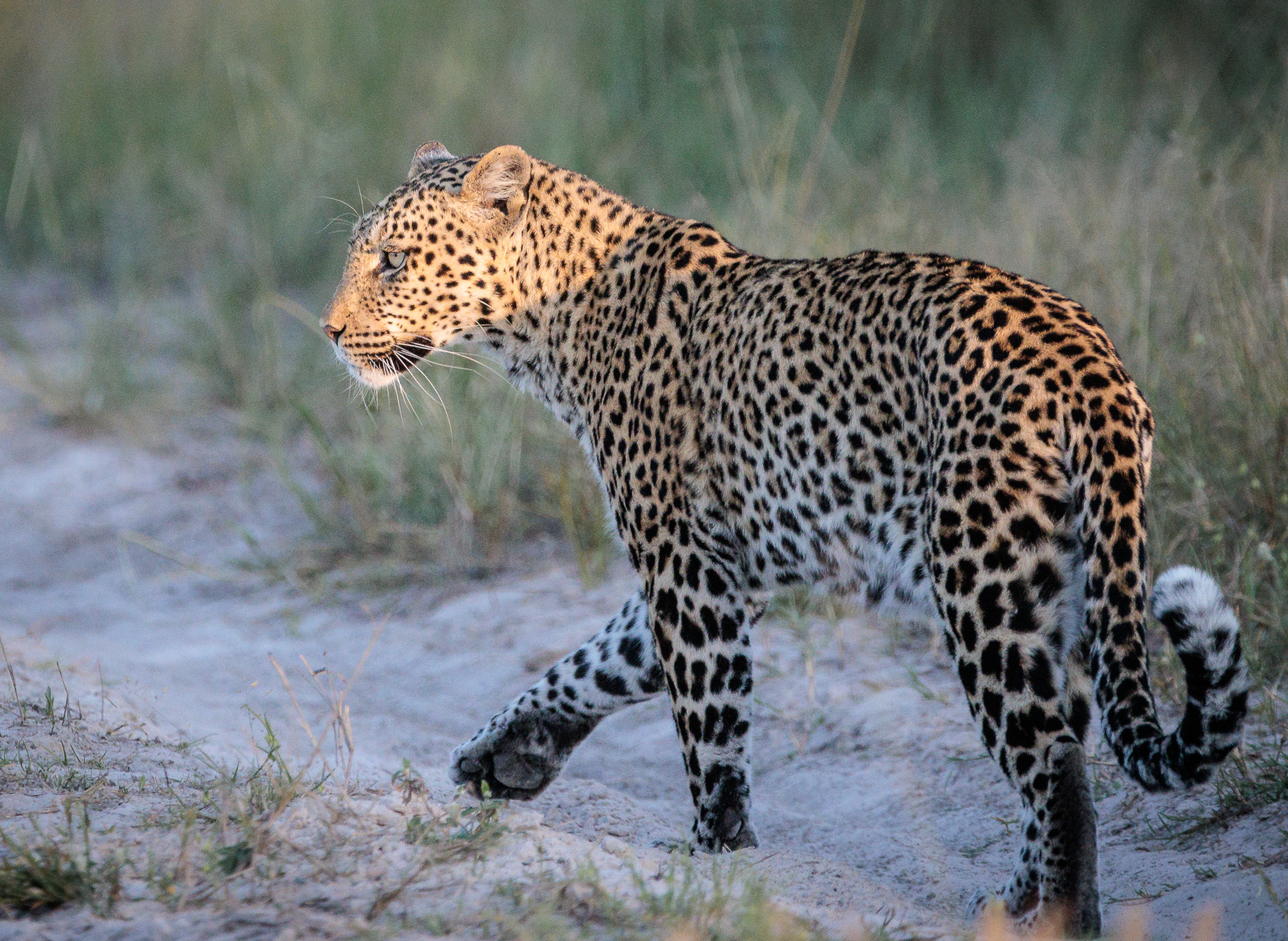 Wildlife photography is all about luck – being in the right place at the right time. It’s also about being prepared with your camera and long lens ready to pickup and shoot at a moments notice like when your subject walks between other safari vehicles into the sun. I got lucky here in the Savuti area of Botswana! Photographed using a very fast shutter speed 1/1600 sec on my long 600mm lens. Brent

How can you make your images more artistic?

After the shoot – remember how you felt when you captured your images and try to reflect that in your post-processing. This is where you can get creative too.

Remember you want your main subject to attract the eye, not all the distracting elements.

Slow down and enjoy the creative process.

Let’s take a look at what our BootCamp members have captured for their wildlife challenge for this month. 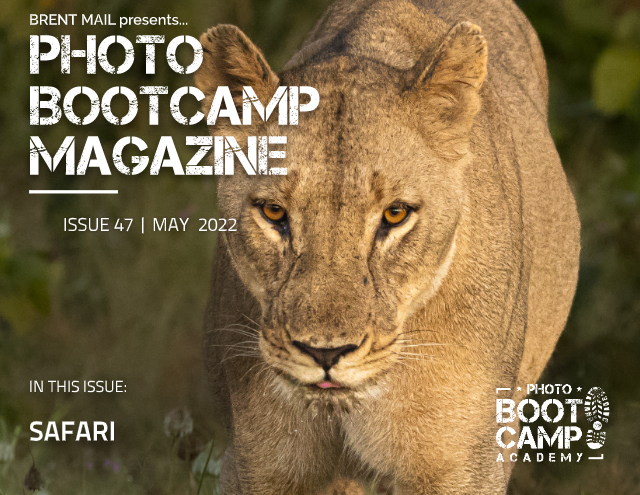 Join Brent and a small group of friendly photographers in Africa for a once-in-a-lifetime experience!

Let’s take a look at this month’s magazine. Here is our featured artist of the month, Eugene Brannan, from the United States

Lions are synonymous with Africa and an African safari is not complete without seeing these beautiful animals. Lion cubs are an added bonus and is sure to please the safari group! These two cubs were seen in the Chobe National Park in Botswana on the recent Photo Boot Camp Safari 2022 The lion pride had made a kill and was feasting on the carcass of a buffalo. These two cubs had already eaten their fill of the kill and were seen frolicking and playing on the fringes of the area of the “kill”. Such a contrast to the brutal carnal scenes of lions tearing apart the buffalo carcass, these two cubs were enjoying playing with each other and the warmth of the morning sun. They were fortunate to be close to the kill, only about 20-30 feet away, watching the pride eat to satisfaction, relax in the morning sun and then return to feed again. Cubs will be cubs as they played with each other and then interacted with their older brothers/sisters, cousins, and adults in the pride.

Comment: Brent Mail – “I remember the scene very well and you’ve captured the playfulness of the cubs. I like how you’ve cropped in and removed all other distractions (there were many) but what makes this shot seem so alive to me are those catch-lights in their eyes from the front-lit sun. Well done Eugene and thanks for sharing – I know how busy you are.” 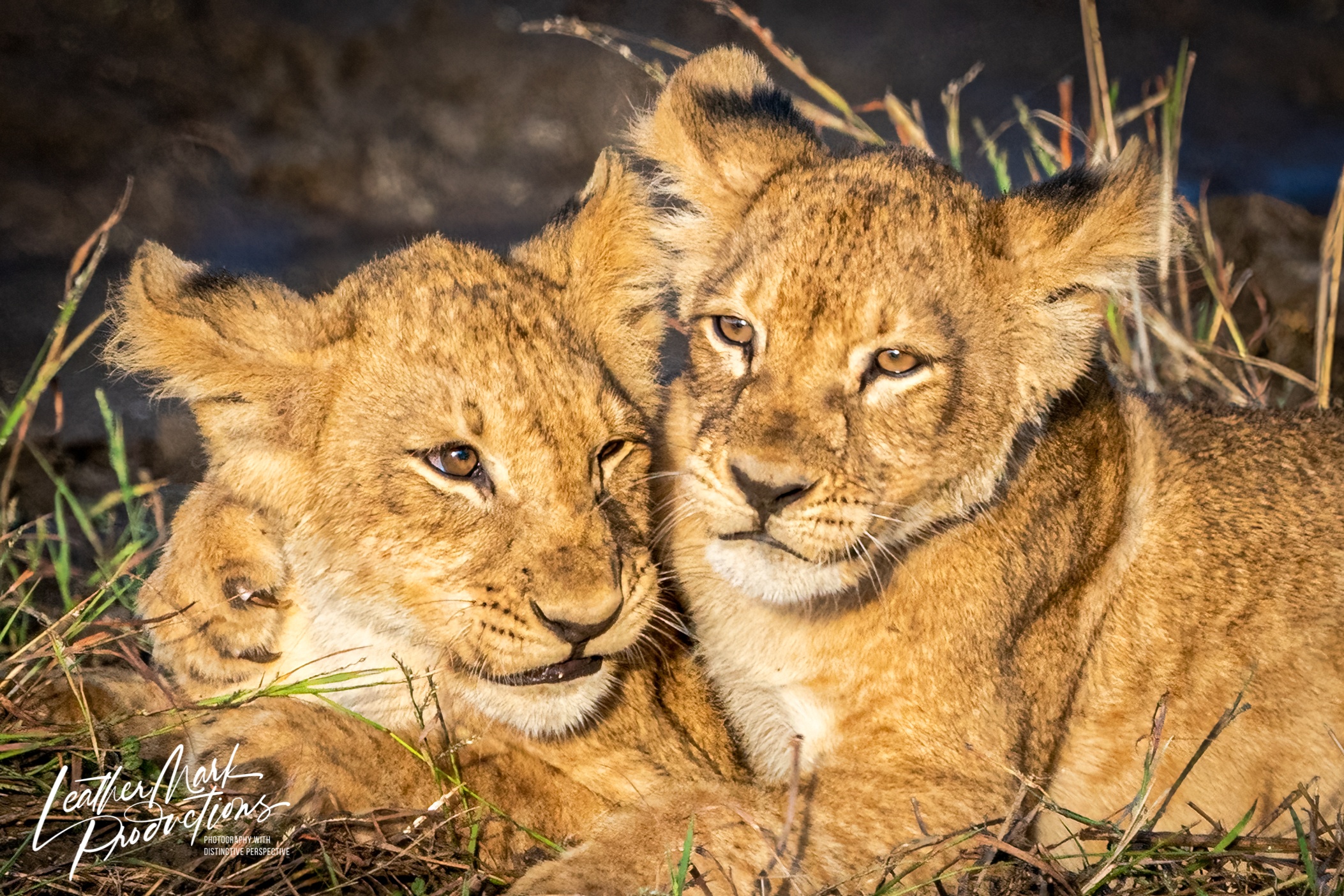 This month’s featured magazine cover image is by Laura Griffiths from South Africa.

She just returned from her private Botswana Safari with 3400 images to sort through. Hence she has not had a chance to get through them, only uploaded them into Lr which took some time. In the meantime Laura has isolated this lioness as she was one of the best cat sightings we had, early in the morning striding through the bush, right up to our vehicle on her way to somewhere. Looking for her family. Later that evening they encountered her and a large pride. She gave a call and they all came out of the surrounding bush immediately, but the policy evidently is not to use lighting on the game. It was already past twilight so the most incredible opportunity to shoot these beautiful beasts was lost, including cubs playing right on the tracks in front of the vehicle. Even headlights would have done the trick. Elsewhere in Botswana for many years, they have done night drives with spotlights after twilight has passed, but at Chobe, it seems that everyone has to be back in camp by dark at the latest. Different strokes for different folks. Her shutter speed was set for always being able to zoom to 600mm no matter what. No time to change it. However, being able to hold the lens stable not for the 600mm stretch AND deal with a moving target taught her to be on the upper end of the shutter speed rather than lower. So much movement to deal with. 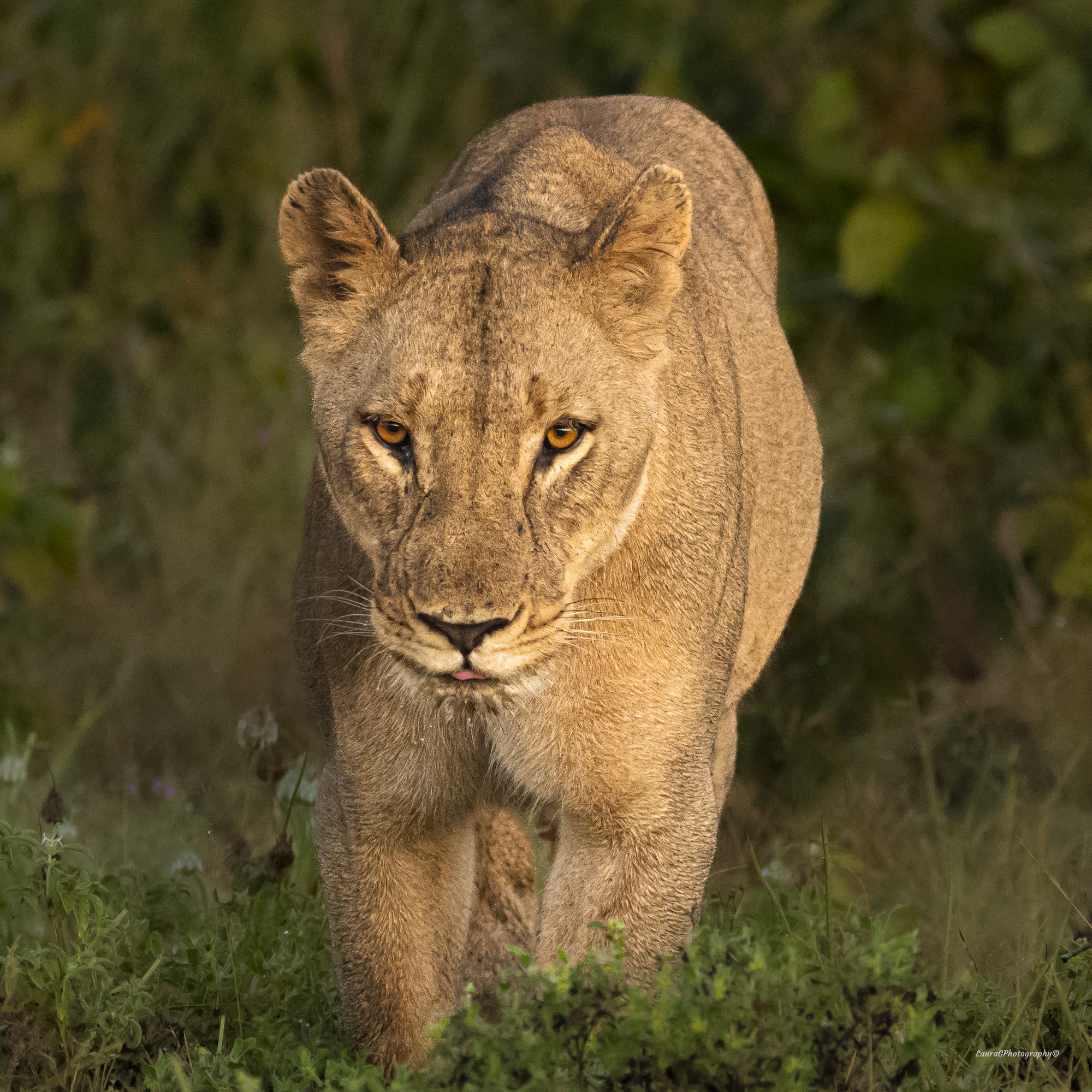 Comment: Greg Skehan – ” This is a beautiful image Laura, and will look amazing if you get to print it in a large format. The restful golden colour and the enquiring look on the face of the lioness are superb. On the big screen, I can almost count every hair follicle as it is so very clear – a credit to your persistence to get such a quality shot in poor light. Extraordinary also that you took 3400 photos – hope you have a lot of “keepers” as you go through the files.”

Let’s take a look at some of the amazing wildlife images our BootCamp members‘ have created this month.

We’ll start with Laima Ratajczak from Australia. They celebrated each Easter down south camping at Augusta and this is when this challenge came through. She wasn’t on safari but she was on an adventure climbing over rocks and walking along the coast when she spotted this crab. It scuttled under a boulder, right on the water’s edge with the waves coming in so it was a bit tricky to get down close with her camera. Laima loved the colours so she just had to post this. Settings….very random!!! She thinks she had her camera on Aperture Priority. Taken with her Canon kit lens.

Comment: Dave Koh – “Wow! That is a wonderful shot of this colorful crab. It must be surprised you spotted it even in hiding. Great sharpness and clarity on full screen. Great job, Laima.” 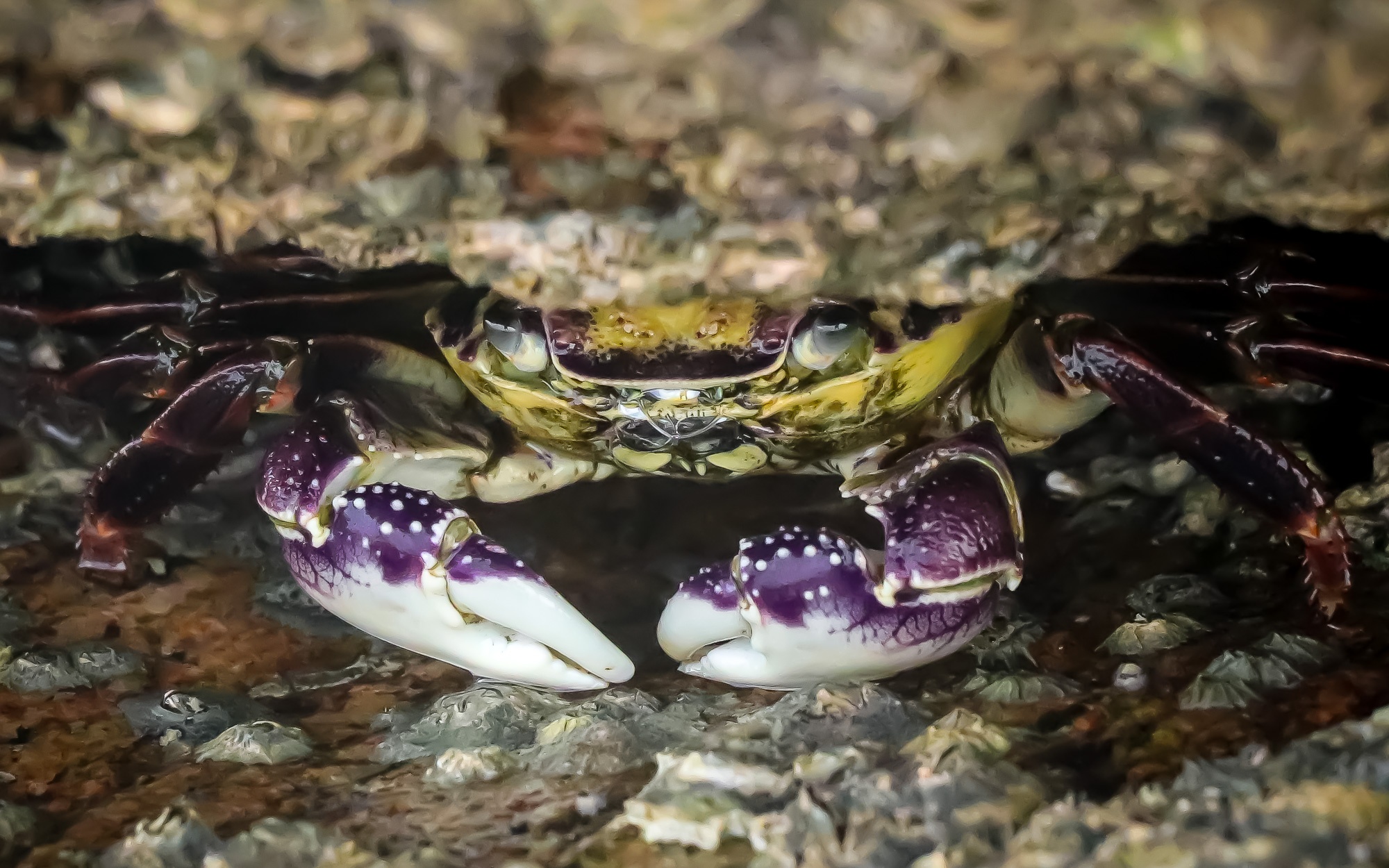 Next, we have Paul Fuller from Australia. Maybe not a Safari, but definitely an adventure, Paul spent three days taking photos of this Osprey. Day one to “Capture it Perched”. Day 2 to “Capture it in Light”, and Day 3 “Catching a Bream”. 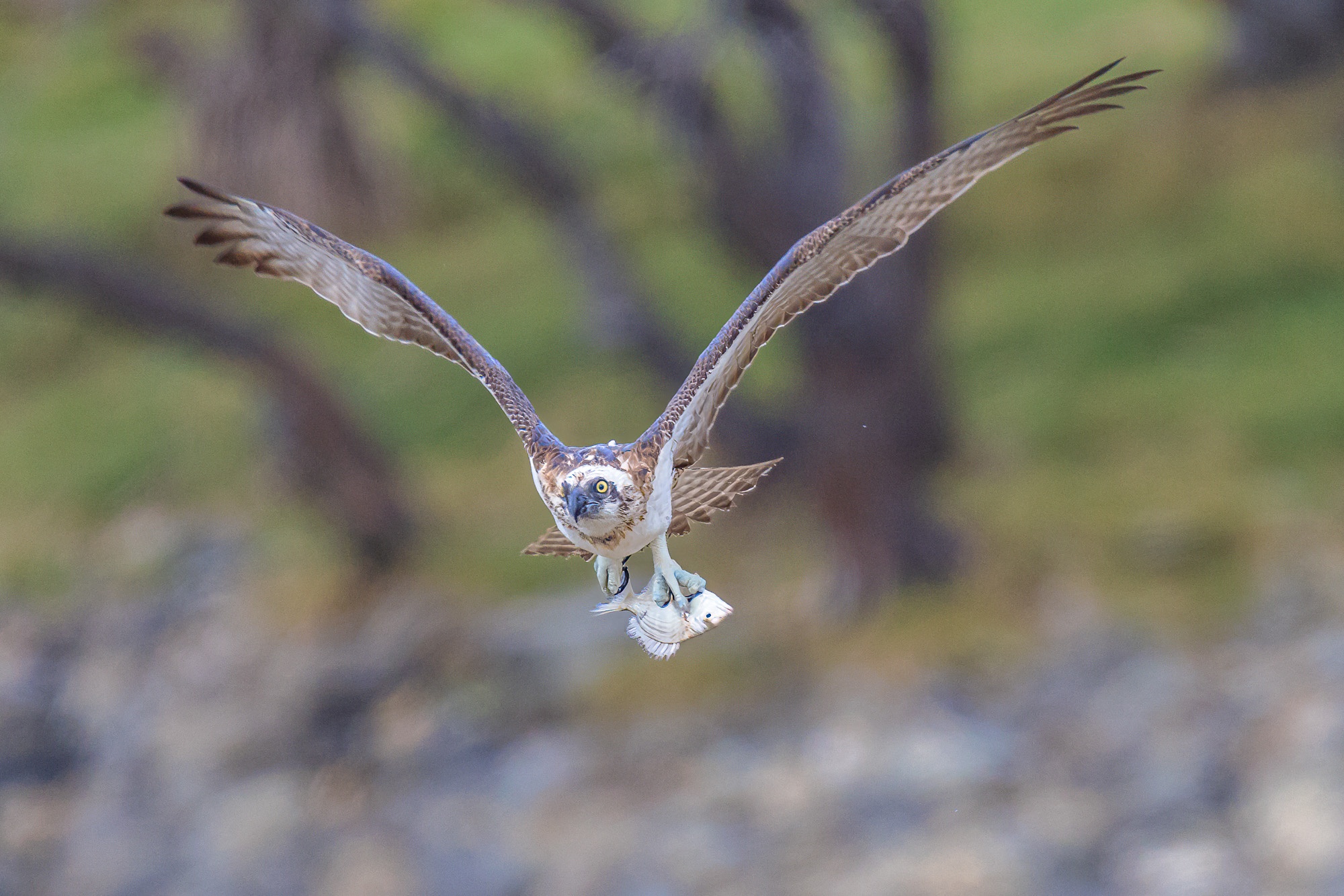 Comment: Leila Gonzalez Sullivan – “Excellent image of the osprey in flight with its prey below. It tells a great story and your persistence in capturing the bird in the air was rewarded.”
Kerri Clarke from Australia is next. She went out a few days ago to check out some wetlands that she had never visited before…and to her delight, she found a colony of Grey Headed Flying Foxes roosting in the vegetation close to the water. Kerrie could hear, and smell them before she saw them. This species is listed as Vulnerable, due to loss of habitat. They play an important role in the pollination of their native forest species. Her image is not as sharp as she’d like, and has a lot of noise, even at ISO 250..but she thought she’d post it anyway.
Comment: Greg Skehan – “Hello Kerrie. I think the focus on the head of the flying fox has very good focus – the eyes and mouth in particular look quite sharp. I love these creatures and how they hang upside down for long periods of time. It is a bit disconcerting looking at images of individual flying foxes at rest because I keep wanting to turn the image 180 degrees!!” 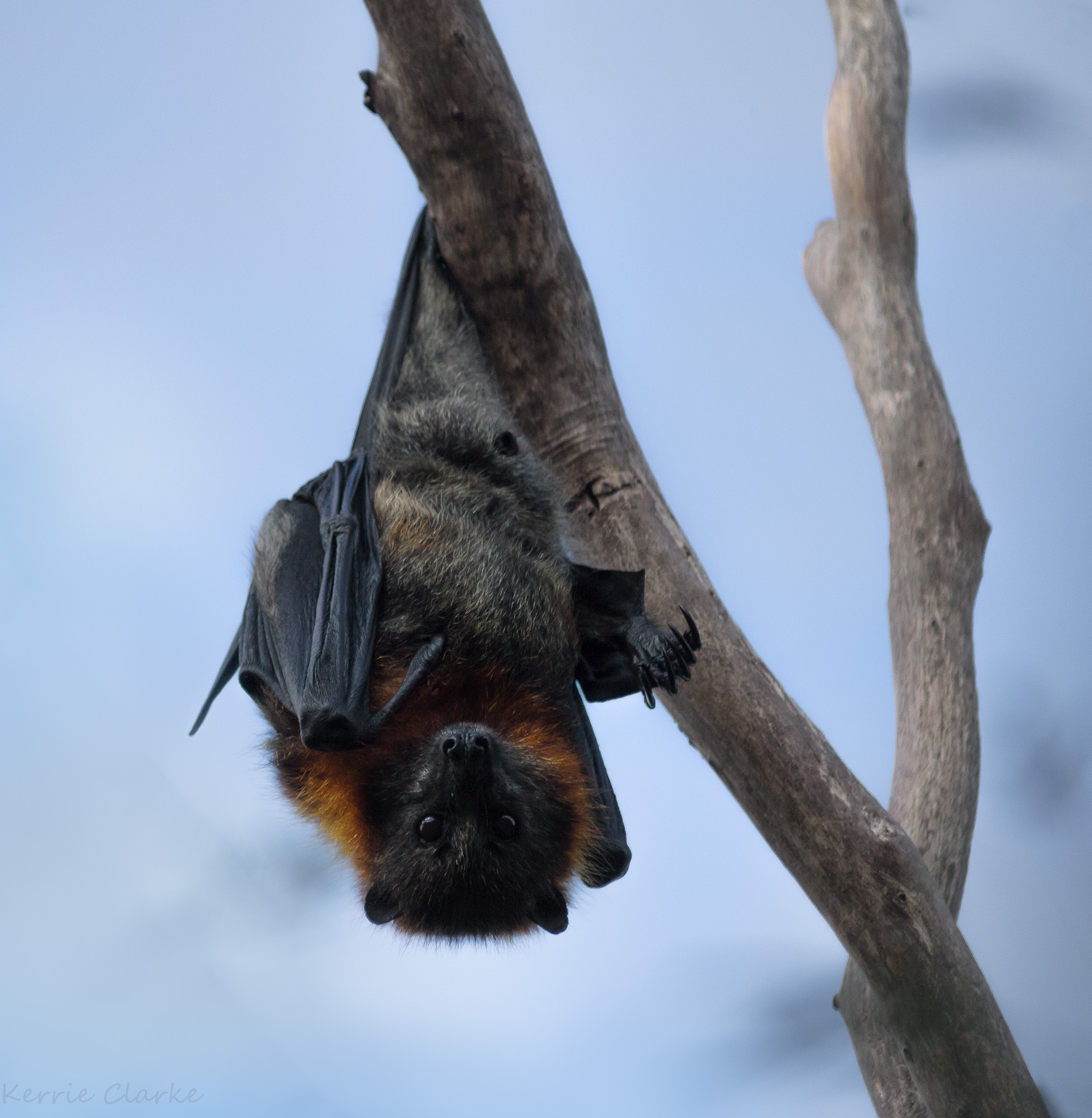 And we have Brenda Potts from the United States. She got back from Alaska just in time to process and post one safari image for this month. Shot at a rehabilitation center between Anchorage and Whittier. Brenda wondered how this Musk Ox lost a horn. She tried shutter priority with everything else on auto. The colors were muted, so she switched this over to b/w and bumped the contrast, texture, and clarity just a bit. 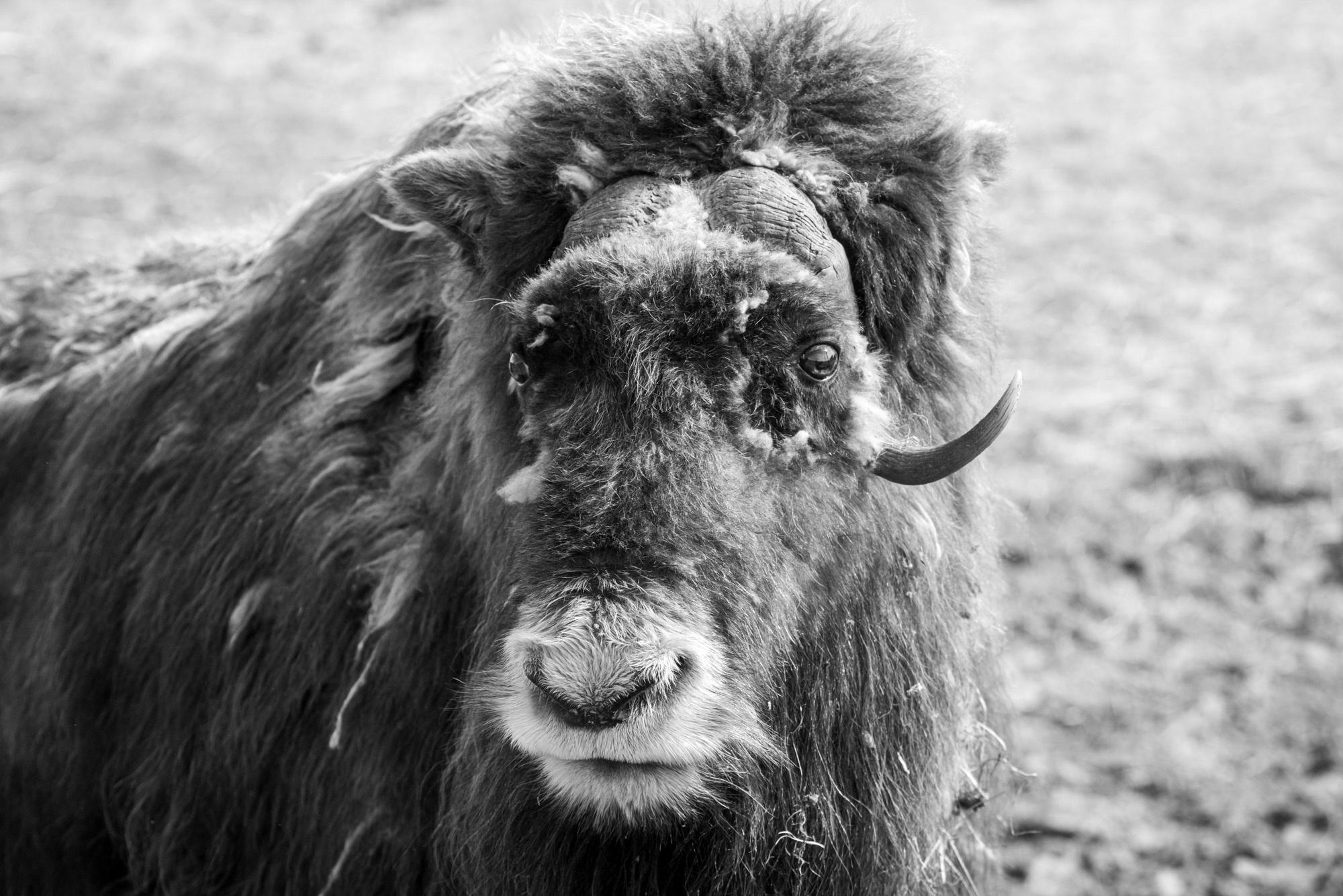 Comment: Sara O’Brien – “Brenda, great detail and I love it in B&W. Well done.”
Next is Jeff Reese from the United States. Thought that he would snap some photos at their local zoo but found all of the animals napping or in quarantine so this goose shows up and decided to pose for him. If you look carefully you can see him reflected in its eye, so in effect, this is also a self-portrait. It was really close, as a matter of fact, this was framed in-camera, no additional cropping was needed. He used an MFT camera.
Comment: Denis O’Byrne – “Hi Jeff. Very nice image and a good headshot. How much easier it is when you can get close up. I might lighten the eye a tad. Well done.” 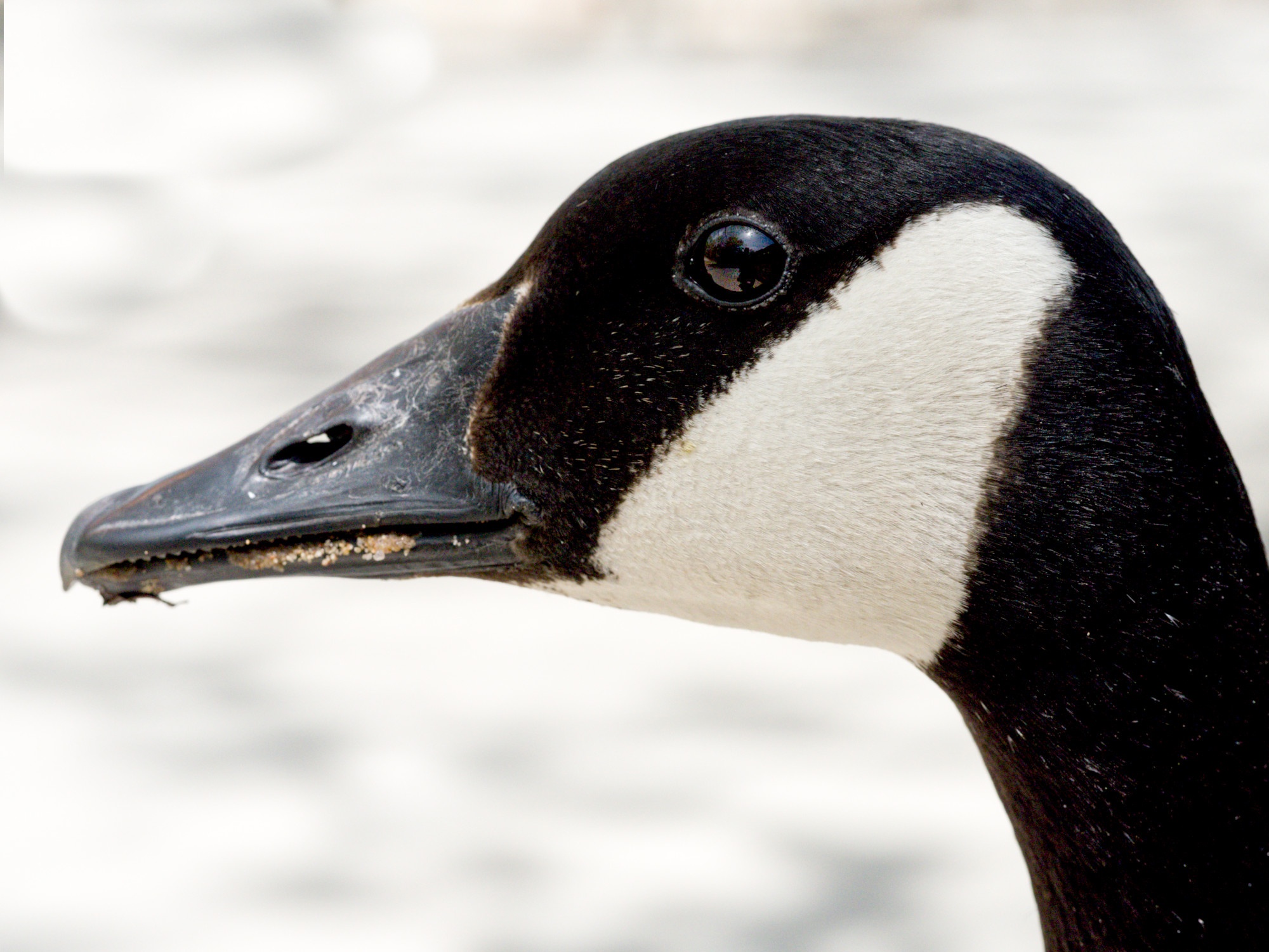 And then we have Kevin Griese from the United States. He believed it is a Red-tailed Hawk. He took this image at Sacramento National Wildlife Refuge. 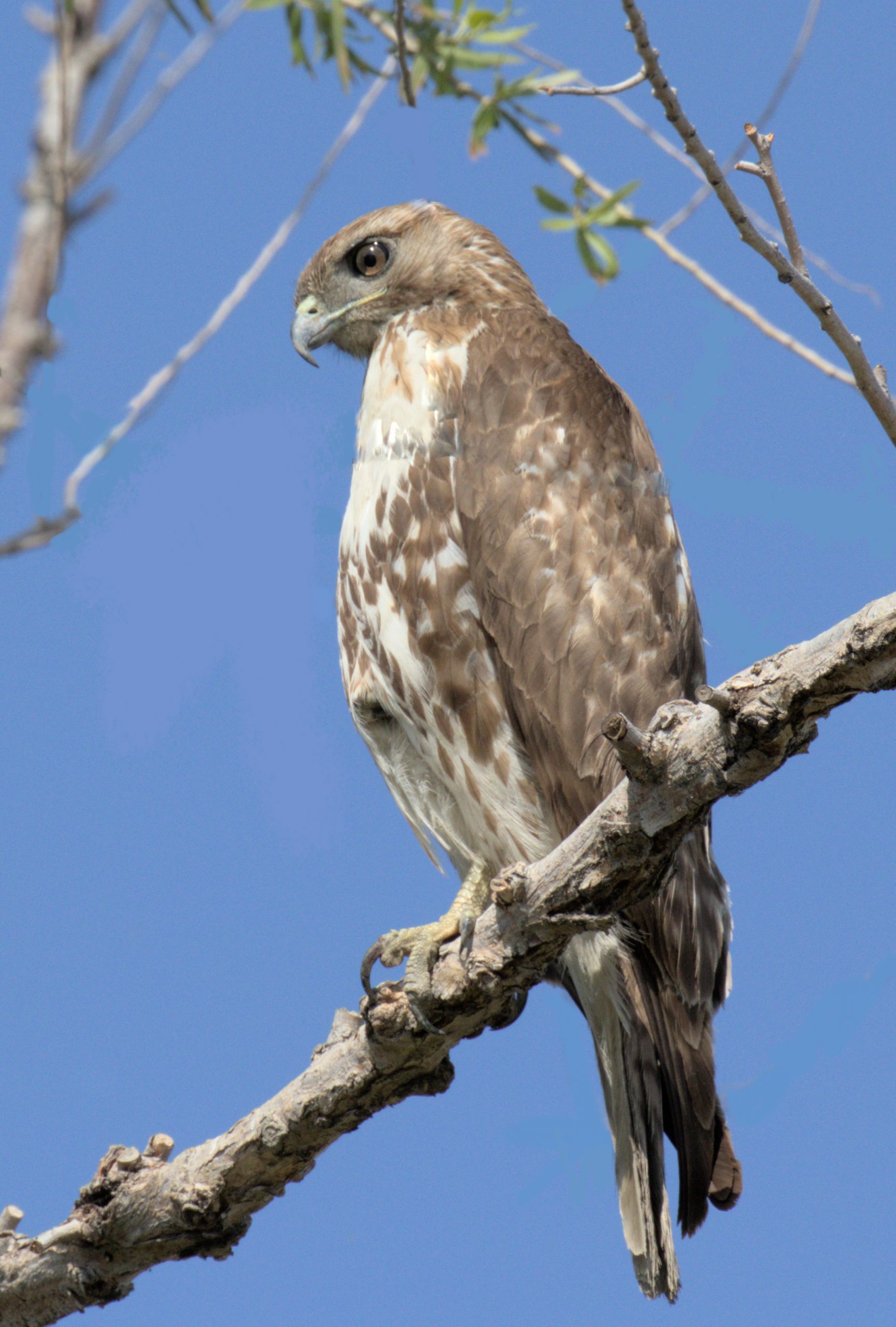 Comment: Denis O’Byrne – “Hi Kevin. Great shot. When I view enlarged the detail of the bird comes to the fore. A few distracting elements for me are the branches that cross the bird and it is a tad dark. I think if you remove the branches and brighten the shot the bird will pop more from the background. Very good work as is.”
And last but not the least, we have Denis O’Byrne from Ireland. Chilly May morning, no sun and overcast. However, about two weeks ago Denis took a safari to the South West of Ireland to visit his sister and brother-in-law in Kenmare. A lovely spot if you ever get a chance to visit. No heavy wildlife like on the African plains but he did manage to capture a few shots. The first one is of a canine friend waiting patiently for the return of his master. Taken in the middle of Kenmare Town itself.
Comment: Peter Brody – “Denis, I like this one much better. It brings out the detail in his face and helps to contrast it against the background.” 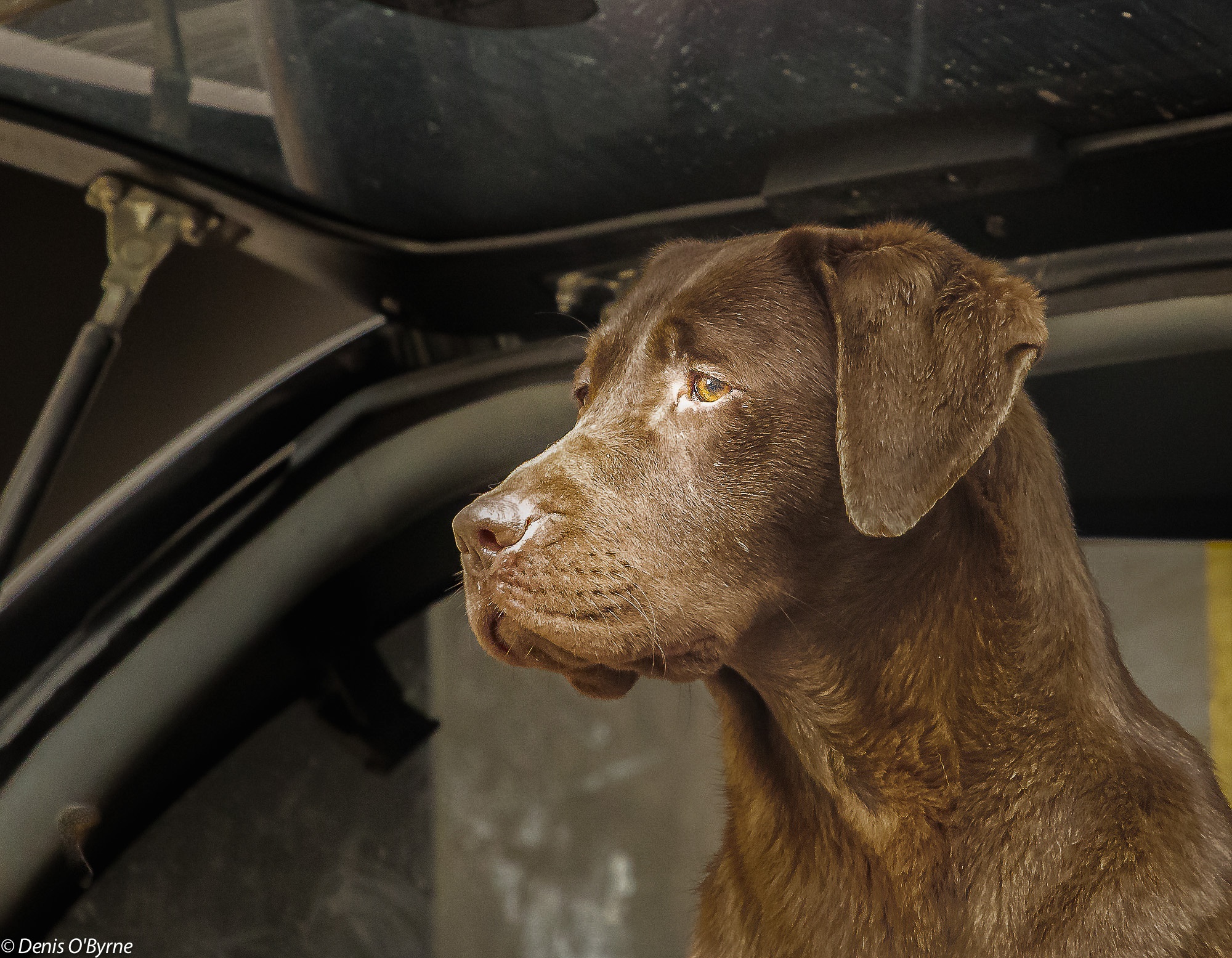 Want to join Brent and a small group of friendly photographers in Africa for a once-in-a-lifetime experience? Click here more more details.