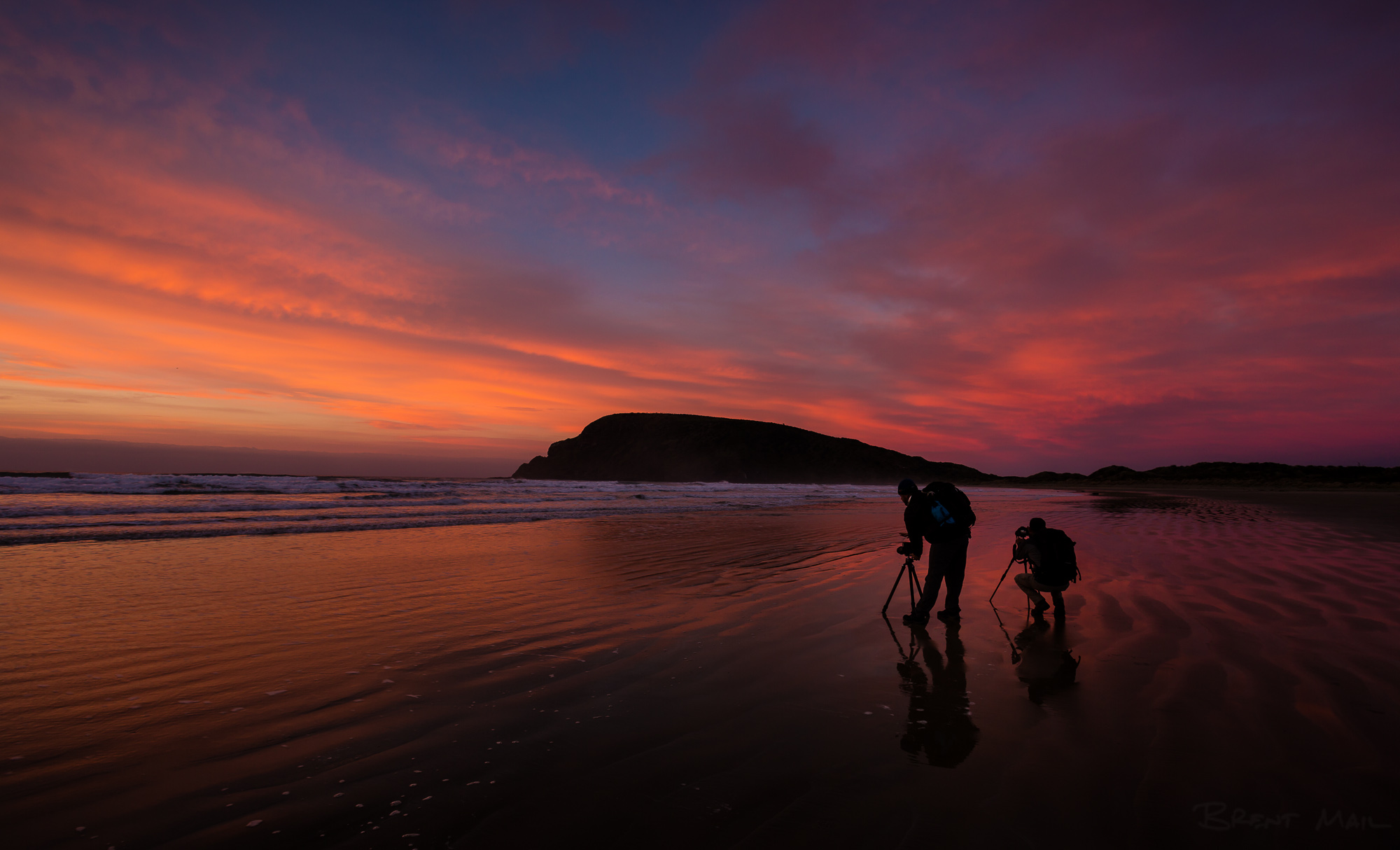 We woke up way before dawn.
Rolled out of the freezing camper van, made a quick cup of tea for me and Johny to get warm and to wake up.
It was still totally pitch black outside and a balmy 1.5 degrees c here on the South Island of New Zealand. Now that is bloody cold for someone like me!
I noticed the Southern Cross in the sky above us. Wow, it was spectacular! Did I notice a few high clouds too?

Heading towards coast – for a sunrise

Within 10 minutes we were on the road – heading towards the coast again, in search of our sunrise.
20 minutes later I started to see the first colours appear in the clouds above us – very faint but they were red.
Yes – it was going to be a great sunrise! I was starting to feel excited – the chase was on.

“Jay – check out the high clouds and the colours already showing, how far are we from the coast?” I said.
“I might have mis-judged the distance, don’t know if we are going to make it in time?” Jay replied.

Dam, this was going to be an epic sunrise and we might not make it!

Let see how fast I can push this camper van.
Turned off the main road – onto a smaller secondary road towards Cannibal bay.
Jay had mentioned that this bay would be a great place to capture the first light of the day – and we might see some wildlife too.
The road went from a secondary sealed road to unsealed to single-lane farm track, winding over hills and through galleys, passing sheep and cows in the predawn light.
Hope we won’t meet another vehicle going the opposite way! That would be a disaster – there was no place to turn off and let them pass.

The clouds were starting to show bits of pink and red. Man this was going to be amazing – drive faster!!!

How fast can I drive the camper van on this dirt road?

How much farther to go?
Would we make it – or miss this spectacular light?
My stomach was now in a knot – with nerves or maybe it was anticipation!

How fast could I drive the camper van and not kill us all? I was pushing it – but we really needed to get there before it was too late!
Johny was in the back getting his video gear ready – being tossed around as we raced around another hair-pin bend on the dirt track. 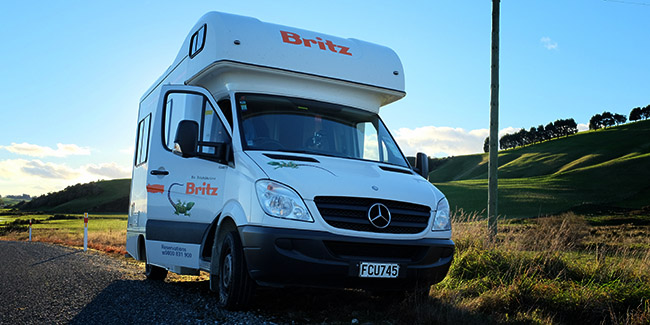 It was getting lighter, did we leave it too late?
There it was, the turn-off and parking area for Cannibal bay.

“Everyone out!” someone said.
Jay and Johny were the first out – running down to the beach with their back-packs full of camera gear.

I parked the camper – right in the middle of the track that leads to the beach. No time to look for a better spot – hope no one comes and tows it away!
Grabbed my gear, ran to the beach – heart racing.

The scene that awaited us was epic – a deserted beach with wet sand, two headlands and the sky was turning out to be, well… unbelievable!

First things first – the landscape photography course we were working on.

Jay was ready to record the lesson.

Johny and I got out gear unpacked: Tripod setup, lens, camera, audio – check!
Today’s lesson was all about bracketing and how to expose for a sunrise.
Johny was filming Jay with a wide angle lens and I was filming the back of his camera – to show everyone exactly how he does it.
The lesson went smoothly – we had all done this before when we were filming The Ultimate Landscape Photography Course and were getting really good – working as a team.
“Cut – all good?”
Check the footage – capture the filler videos (things Jay was talking about like the sky, the lines and reflections on the wet sand)

While I was filming the “filler” footage, Johny and Jay were already shooting this spectacular sunrise.
They were in heaven!
There was one more scene I still needed to capture. 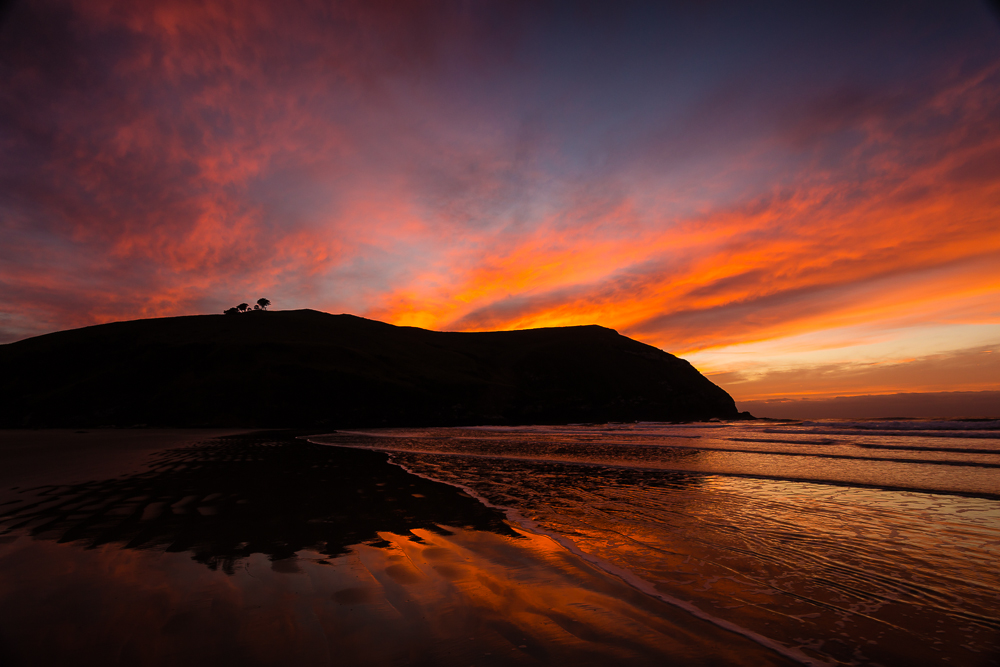 “Jay, how do you feel right now?” I asked him while recording.
“Awesome, this scene is amazing, WOW! The only thing that would make it better is if we got to see a sea lion right here.” Jay replied with a little chuckle.
I laughed – Jay was always joking around with us.

What were the chances of spotting a wild sea lion?

Time for me to capture this sunrise
Off I went to capture this awesome sunrise. The sky turned on the most amazing light show I have ever witnessed. Reds, pinks, purples – you name it.
Everywhere I looked – there was colour.
I dropped my backpack, started to change my lens – so that I could photograph more still images – with my wide angle now.

Huge sea lion on the beach

I heard Jay gasp.
Wonder what he had seen?
There up the beach coming down to the water was this massive sea lion.
No way – I can’t believe it. What were the chances?
My heart was racing – how close can I get and still be safe?
Time to put back my 135mm f2.0 lens and shoot. 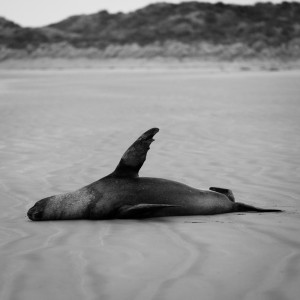 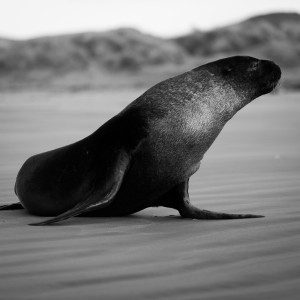 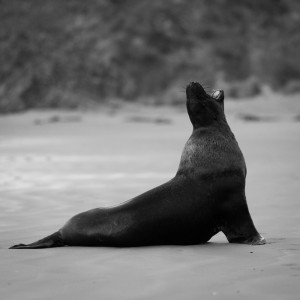 We spent the next 10 minutes photographing this amazing creature as he made his way down to the water’s edge – stopping and lazing around every few minutes, rolling over, yawning and then getting up again and making his was closer to the water.

How good was this!
3 landscape photographers having the time of their lives – on a very chilly morning on a wild remote beach in New Zealand.

Highlights of my life!

For me, this was one of the highlights of my life.
One of those moments I will never forget – like my wedding, or the birth of my 2 children.
and…
to share it with two other passionate landscape photographer – just topped it off for me.

Only a photographer will know the feeling

Have you ever felt the same?

Let me know below (please leave me a comment)