I was fortunate enough to be asked to photograph some of the top surfers in Port Stephens, just before this weekends surf contest. The examiner newspaper has just run to story with one of my images. Please read all about it below. I shot them at birubi beach on a stormy day and used off camera lighting to light up the surfers and underexpose the background, to enhance the stormy environment and give the image a more moody feel. Wanted to do something different, not the normal smiley shots that we see all the time in the newspapers. Do you think I achieved the effect? Please comment. Brent 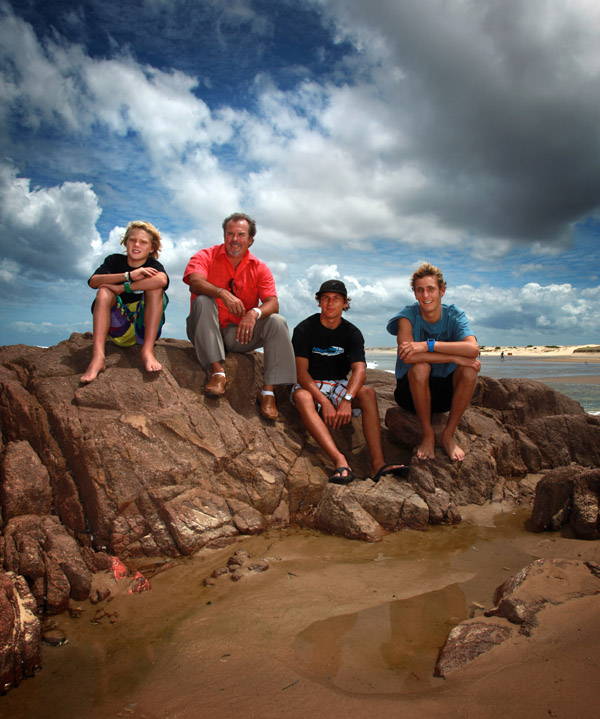 Surfing wild cards up for grabs at Port Stephens Toyota Trials on February 27
Open, Under 20s, U/16 and U/14 divisions

FOLLOWING an outstanding response over the past two years from surfers around the region eager to snatch wild cards into premium Burton Toyota Surfest events, the Port Stephens Toyota Trials will give five lucky surfers a boost into the business end of four events.

In addition, U20 surfers could also gain a spot into the round of 32 of the Chiko Pro Junior.

And if that isn't enough surfing action, there are also opportunities for cadet divisions. Surfers in both U16 and U14 age divisions can gain free entry into the Sanbah Cadet Cup.

The Port Stephens Toyota trials will be mobile and will be held at either Birubi beach or at One Mile Beach – depending on which break is offering the best waves on the day.

"The wild cards give surfers the opportunity to be catapulted straight into the business end of the competition, where they will have the chance to surf against some of the best surfers from around the world," Mr Burton said.

Surfest chief Warren Smith said the success over the past two years of breaking from a long-held tradition of all Surfest events being held in the Newcastle area – made it essential to run the event once again in beautiful Port Stephens.

"It's great to take the competition to Port Stephens and terrific to get support from Burton Toyota.

"Last year's winners Ryan Callinan and Jake Sylvester from Merewether are both showing they have what it takes to compete at the top level and really set a high standard for the competition and with around 50 entrants, it was tough competition," Mr Smith said.

The Port Stephens Toyota Trials will be coordinated by entry fees by the Bay Area Boardriders, in conjunction with the Newcastle Surfboard Association.

Entry is $25 and forms for the Port Stephens Toyota Trials can be found on the Burton Toyota Surfest website under the "Competitors" link.

Surfing wild cards up for grabs at Port Stephens Toyota Trials on February 27
Open, Under 20s, U/16 and U/14 divisions