Splash Photography: A Great Way To Show The Fun Of Summer

What is splash photography?

The definitions of splash are:
1) A small amount of a liquid that has fallen or been dropped, to become spattered about.
2) Splash of water or splash of color.

Photography capturing different types of water movement, whether natural or artificial is considered splash photography. This can range from waterfalls, droplets from a rain shower to doing product/object drops into a water tank and capturing splashes that way. There are many ways to capture splashes. 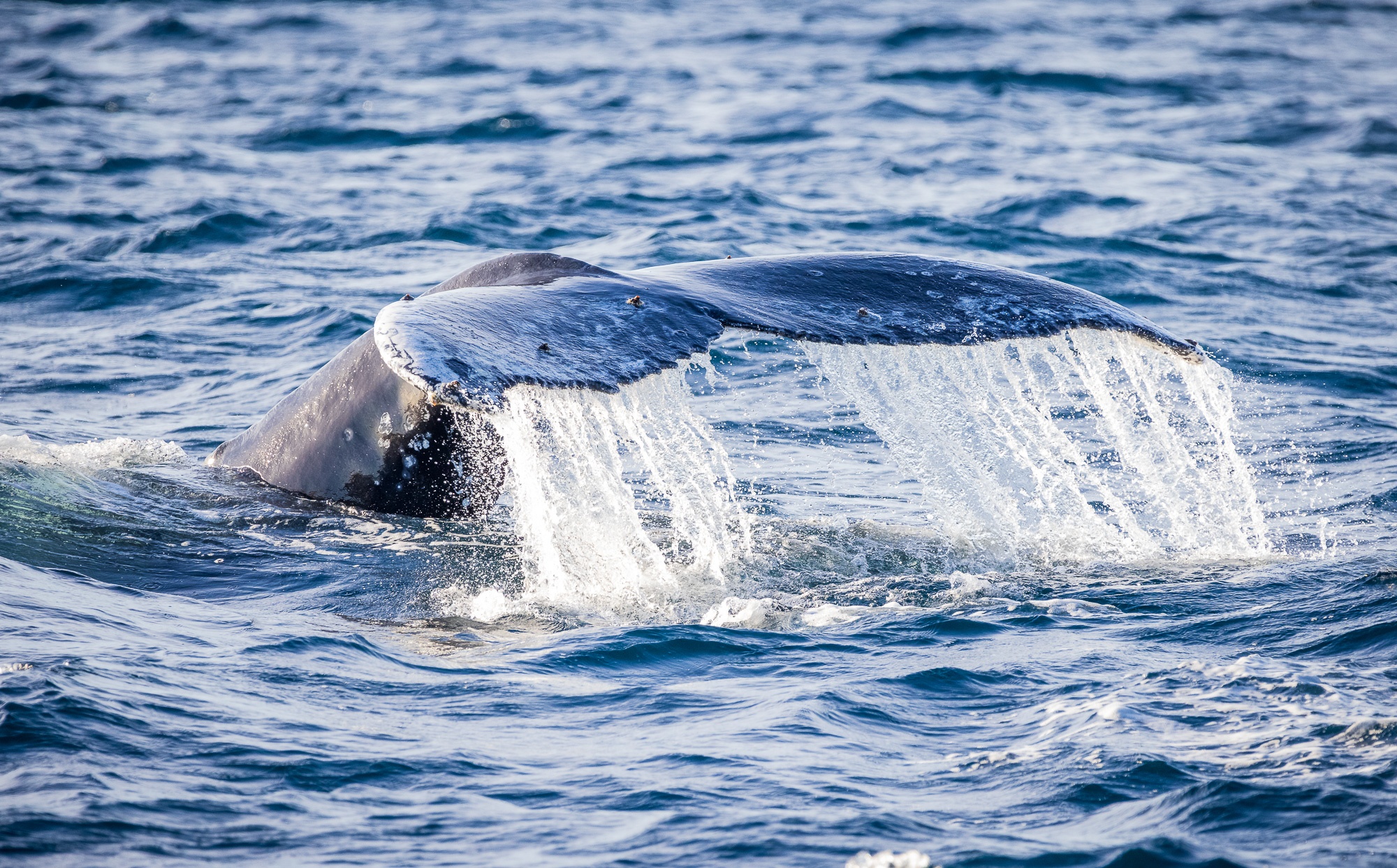 Splash photography can be a great way to show the fun of summer. Swimming pools and beaches and our friends and family splashing about in the water. It can also be used to create the feeling we get when we’re standing in front of a waterfall, rushing stream or big huge waves.

While splash photography can sometimes be challenging, it is also a great deal of fun to photograph.

How to do splash photography? 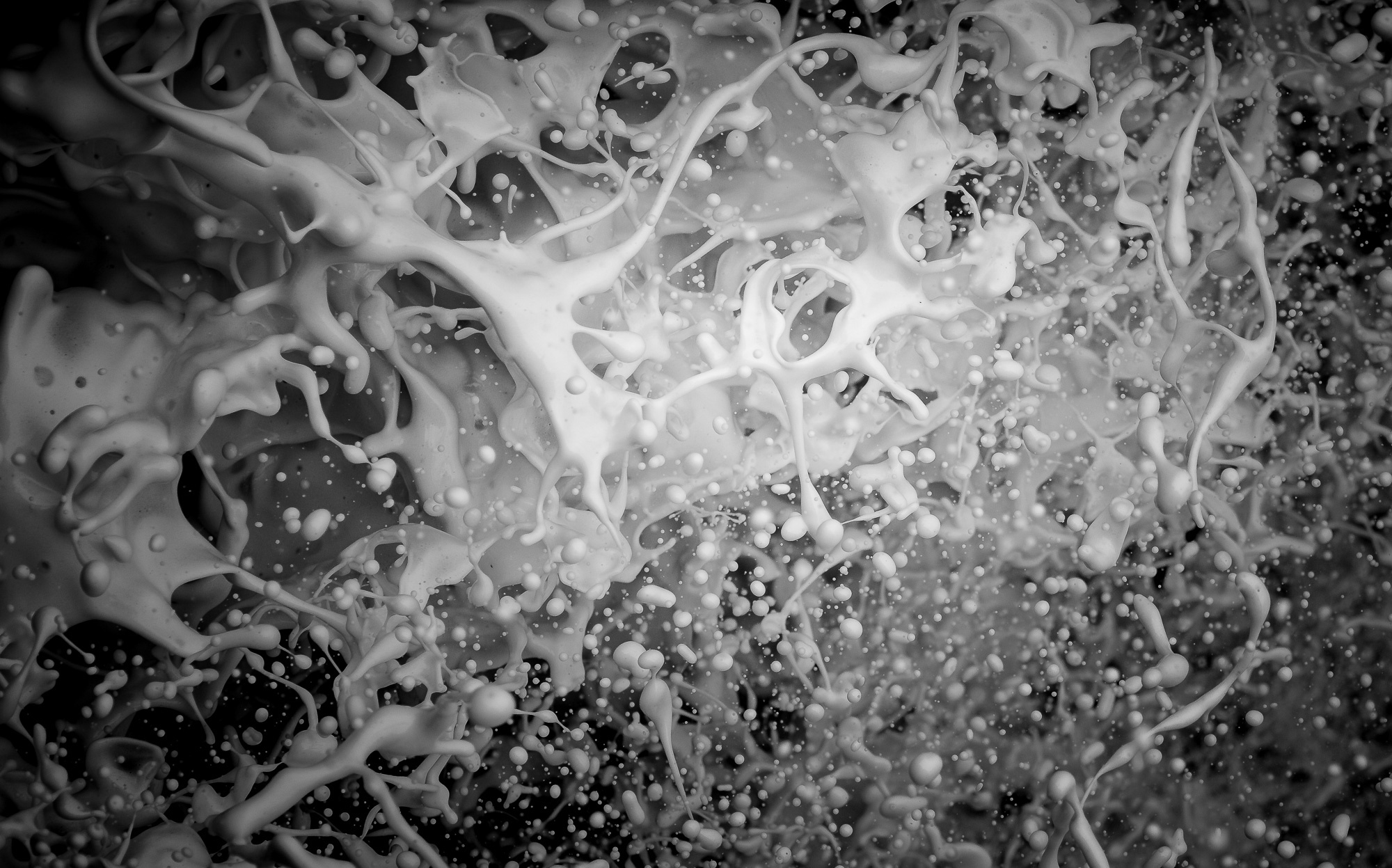 Photographing water lends itself to experimenting with shutter speeds, ND filters and more just to see the different types of outcomes that can be achieved. Creating our own splashes using a water tank and dropping items into it requires a little more setup and work to capture. The results are well worth the effort though.

As with any images you create, be aware of your composition and watch for distractions before you click that shutter.

Let’s take a look at what our BootCamp members have created for this month’s challenge for the SPLASH. 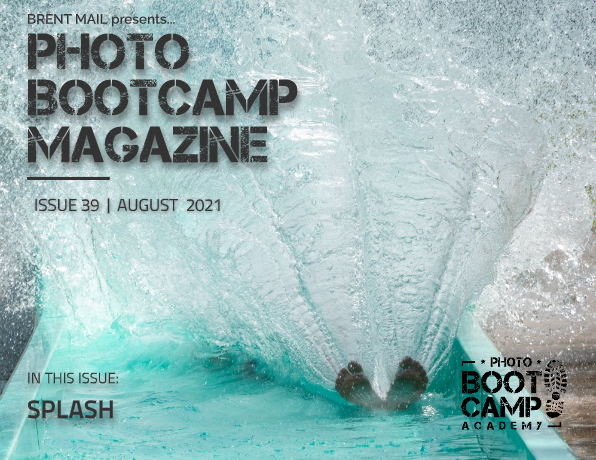 Join The Fastest, ‘Funnest’ Way To Improve Your Photography! 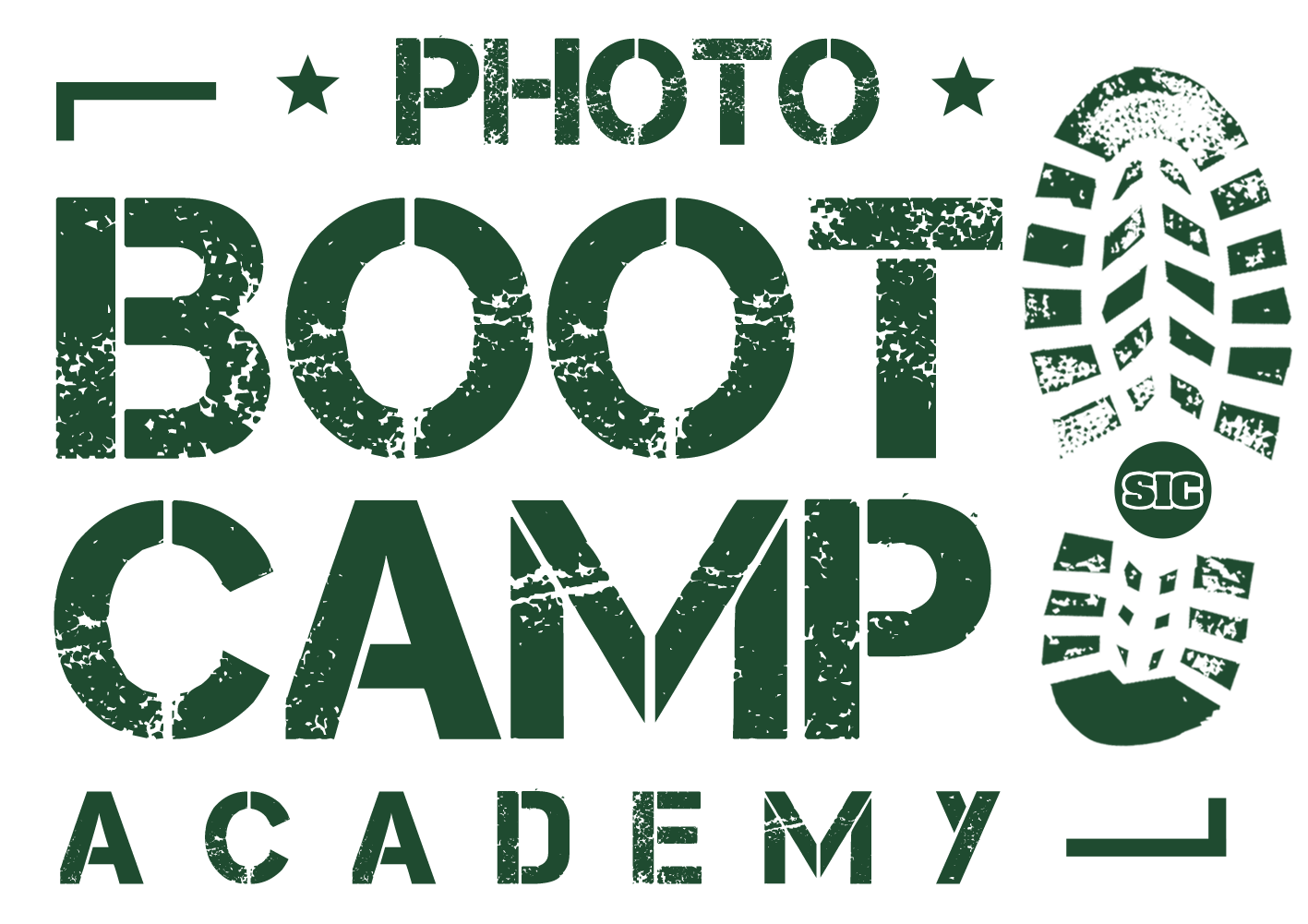 Photo BootCamp Academy is an online community where busy photographers gather to take their photography to new levels of enjoyment and progress.

Let’s take a look at this month’s magazine. Here is our featured artist of the month, Jenine Tracey, from Australia.

This photo of a whale was taken off the east coast of Tasmania in November 2020.

Comment: Laura Griffiths – “Love this Jenine. Also what a great idea for a splash photo. It needs to be viewed in full screen to appreciate the water droplets. I love that you have made it black and white also. Original thinking.” 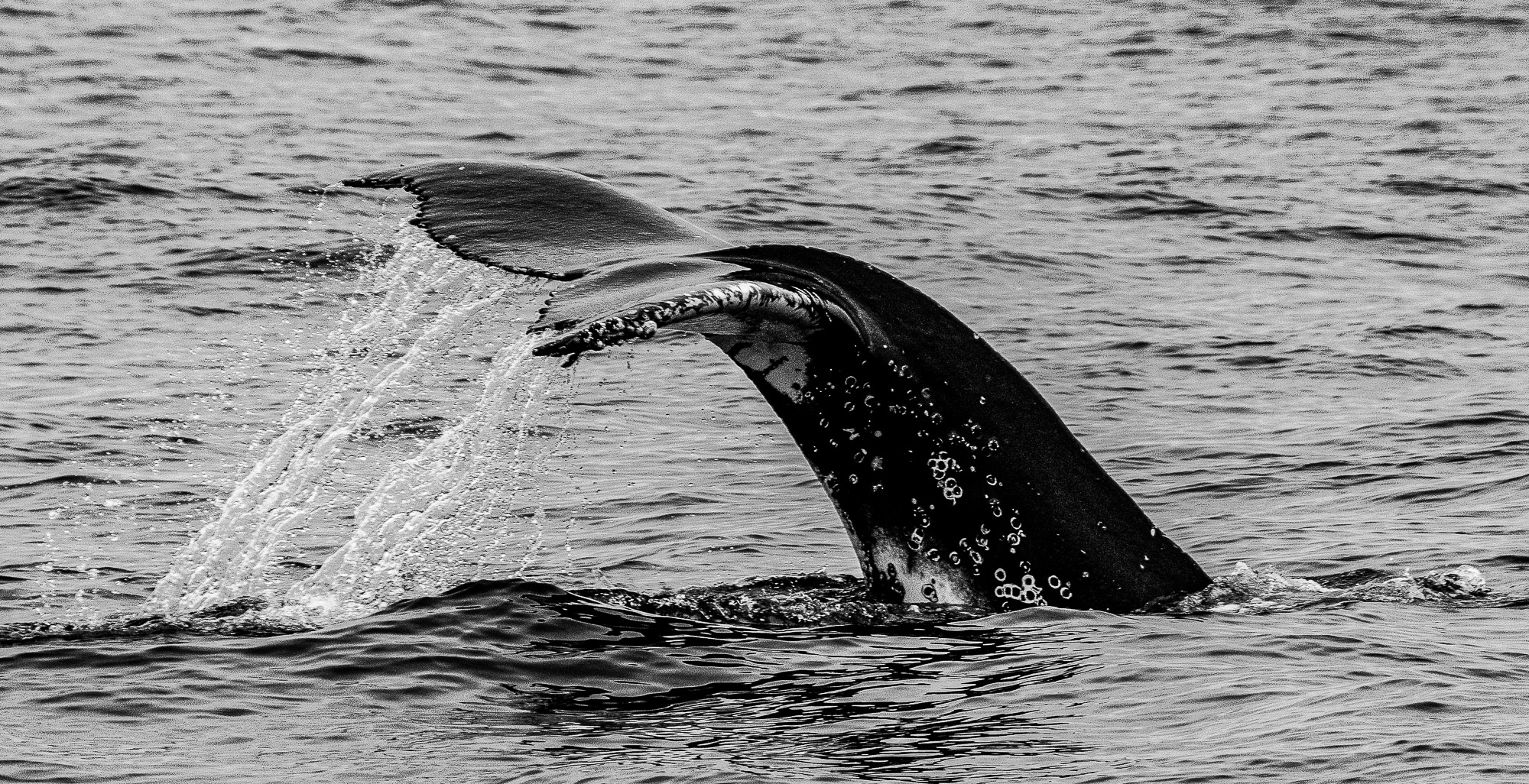 This month’s featured magazine cover image is by James Herrick from Canada.

He started this month thinking about what he already has that he could use for this challenge since they were still in some stage of lockdown. After choosing this one he did end up taking four others during the weekend of various splashes that would have worked for the challenge.

This photo was taken two years ago on a family vacation to Whitefish, MT where they spent one of their afternoons at the local water-slide park. You can clearly see his son (okay, it’s only his toes you can see!) as he reaches to the bottom of the seven-story Geronimo Speed Slide. James cropped the original to include as much of the fantail-shaped spray as possible while still allowing us to see that it is a water-slide. 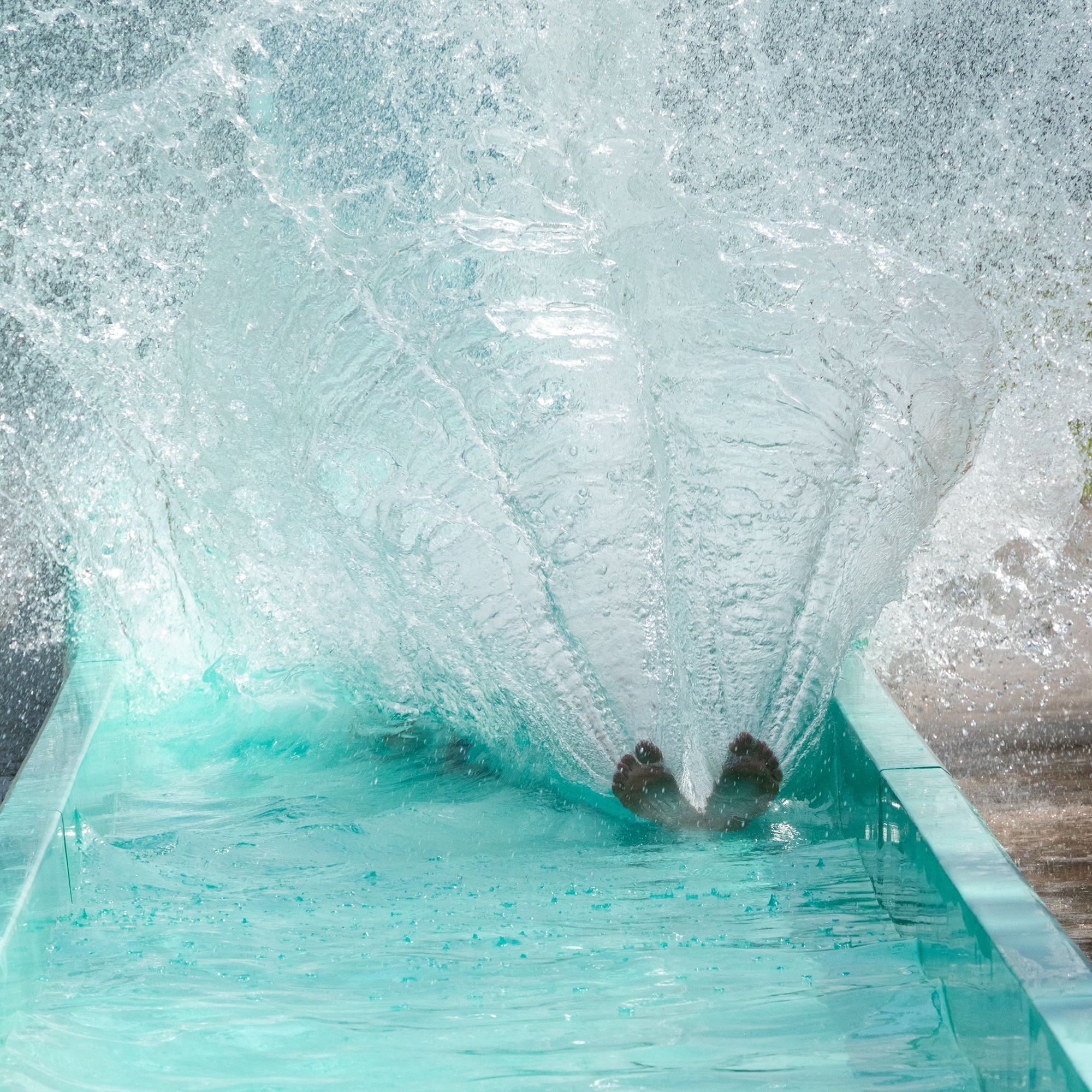 Comment: Leila Gonzalez Sullivan – “Hi, James: Our kids are off to the water park just now. I love your view of the slide, although I can’t tell how tall it is, and the diagonal line of the fang spray off your son’s toes is fantastic. I like that you kept to the slide itself so the image is mostly blue.”

Let’s take a look at some of the splash photography images our BootCamp members’ created this month.

We’ll start with Brenda Potts from the United States. This is her friend Todd wakeboarding on the Columbia River in Washington State just 30 minutes after his wedding. She was sitting on the boat taking photos and this one made her laugh. 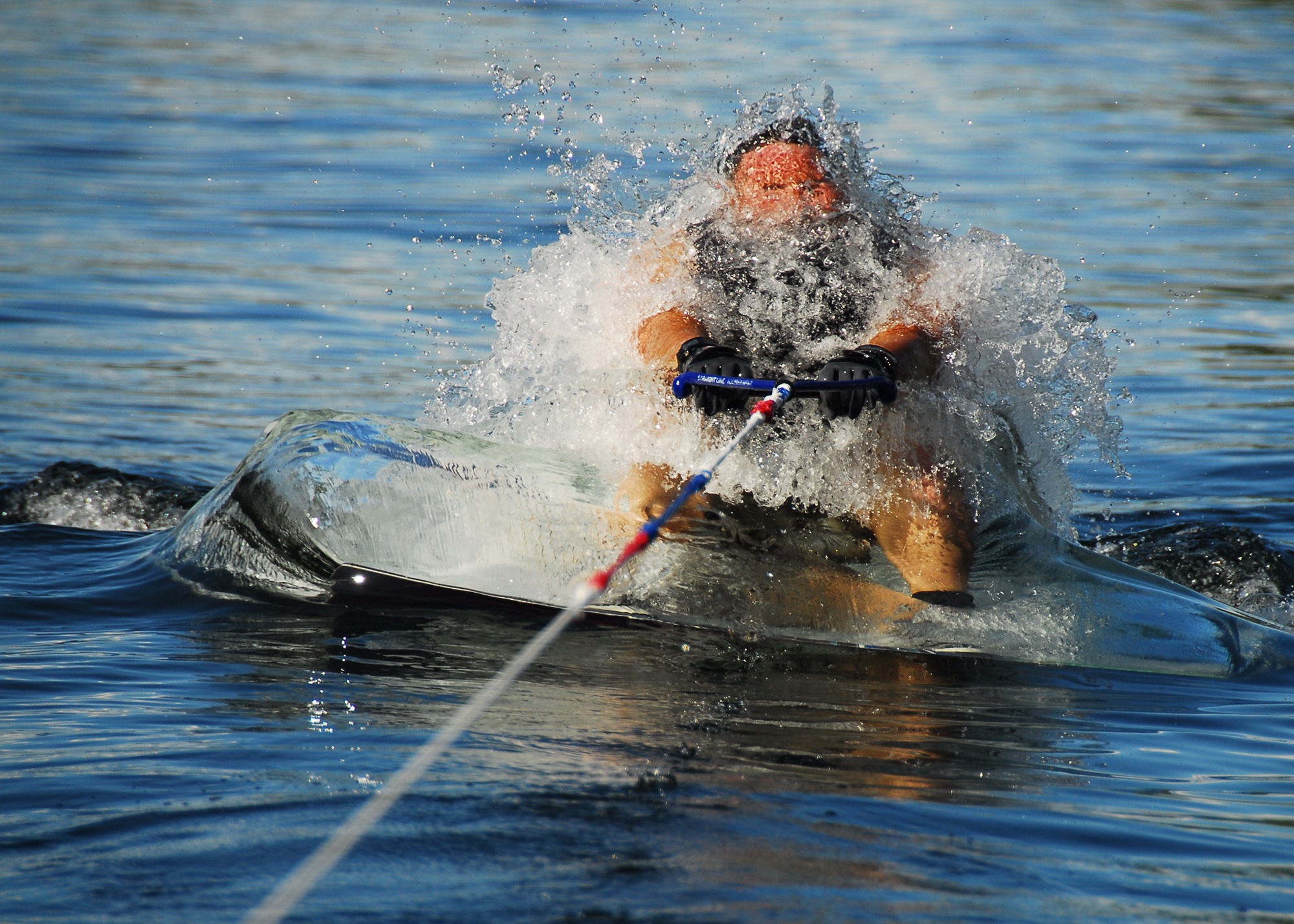 Next, we have Peter Dwight from Australia. His first splash shot. This burst into the sky taken on the South coast of NSW about 8 weeks ago on his way home from his trip. 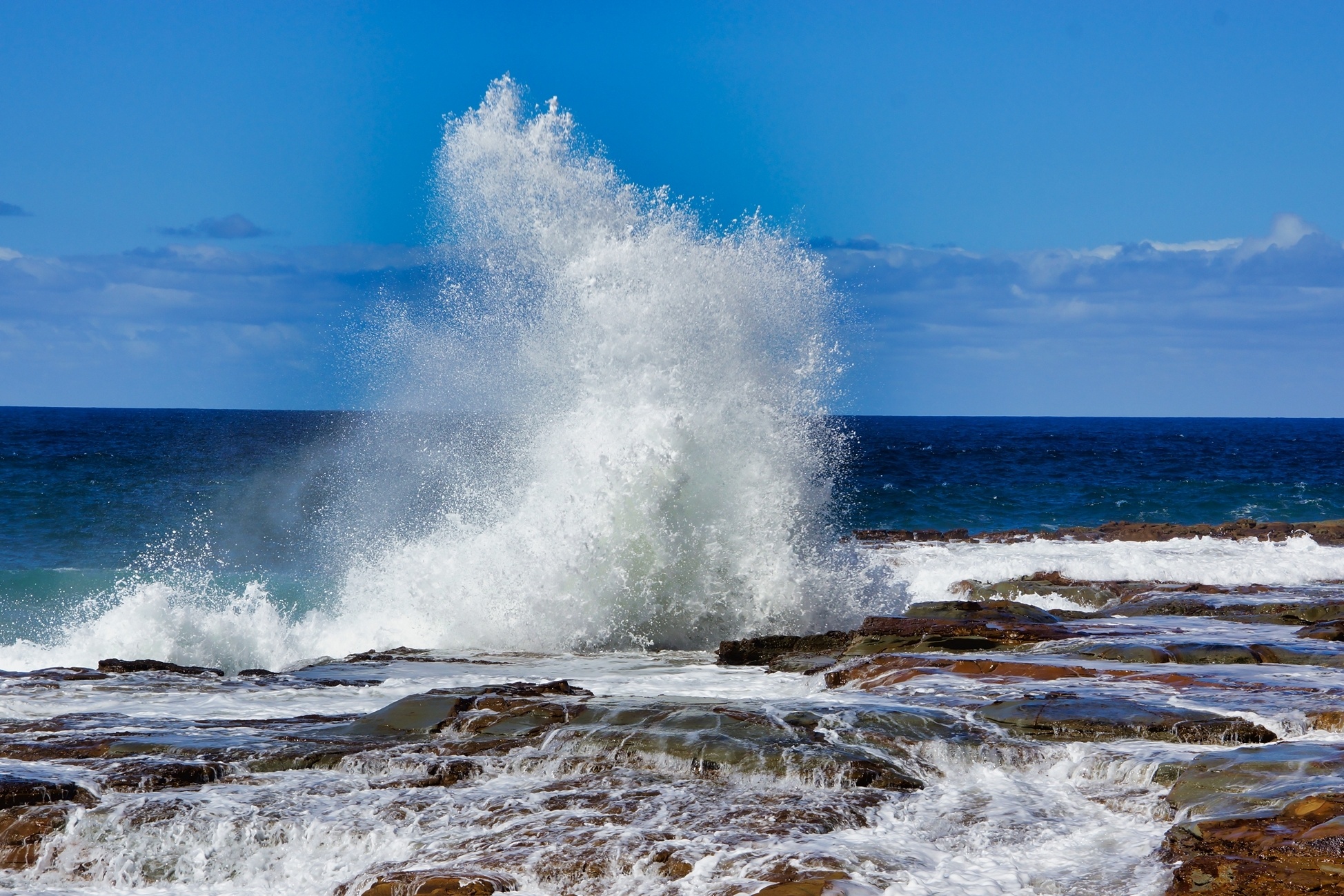 Comment: Richard Hutson – “Peter, I would call this a majestic splash ! The composition with rocks in the foreground with the deep blue sea and sky is perfect.”

Eugene Brannan from the United States is next. This splash photo was taken on the west coast of Florida at Caspersen Beach at sunset, thus the warm tones in the background. Splashes and waves are great fun to watch, even relaxing to the point of being mesmerizing at times. Even in small splashes, the power is on display.

Comment: Caroline Holdstock – “Yes, it does feel as if I am about to get wet! I love the crisp cool tones of the splash against the warm tones of the sunset in the background. Great shot well done.” 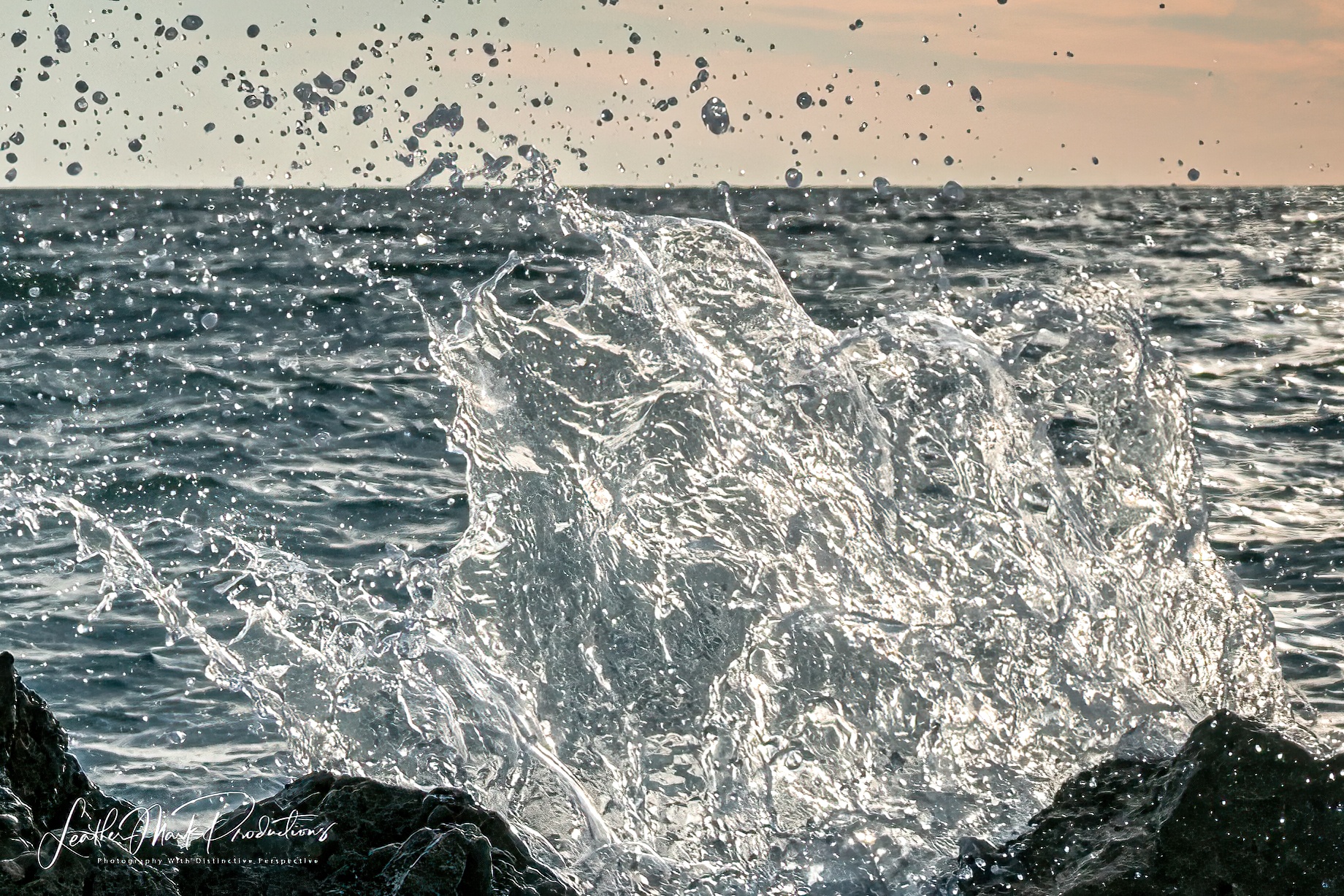 Greg Skehan from Singapore is next. He was traveling in Namibia in 2009 and had a chance for a boat trip to look for dolphins. They saw quite a few but it was difficult to get a decent photo. In typical fashion, quite unexpectedly one jumped out of the water on his side of the boat and he was able to get a reasonably good photo of the dive and splash. Namibia really has to be one of the best countries for diversity for nature lovers and photographers. 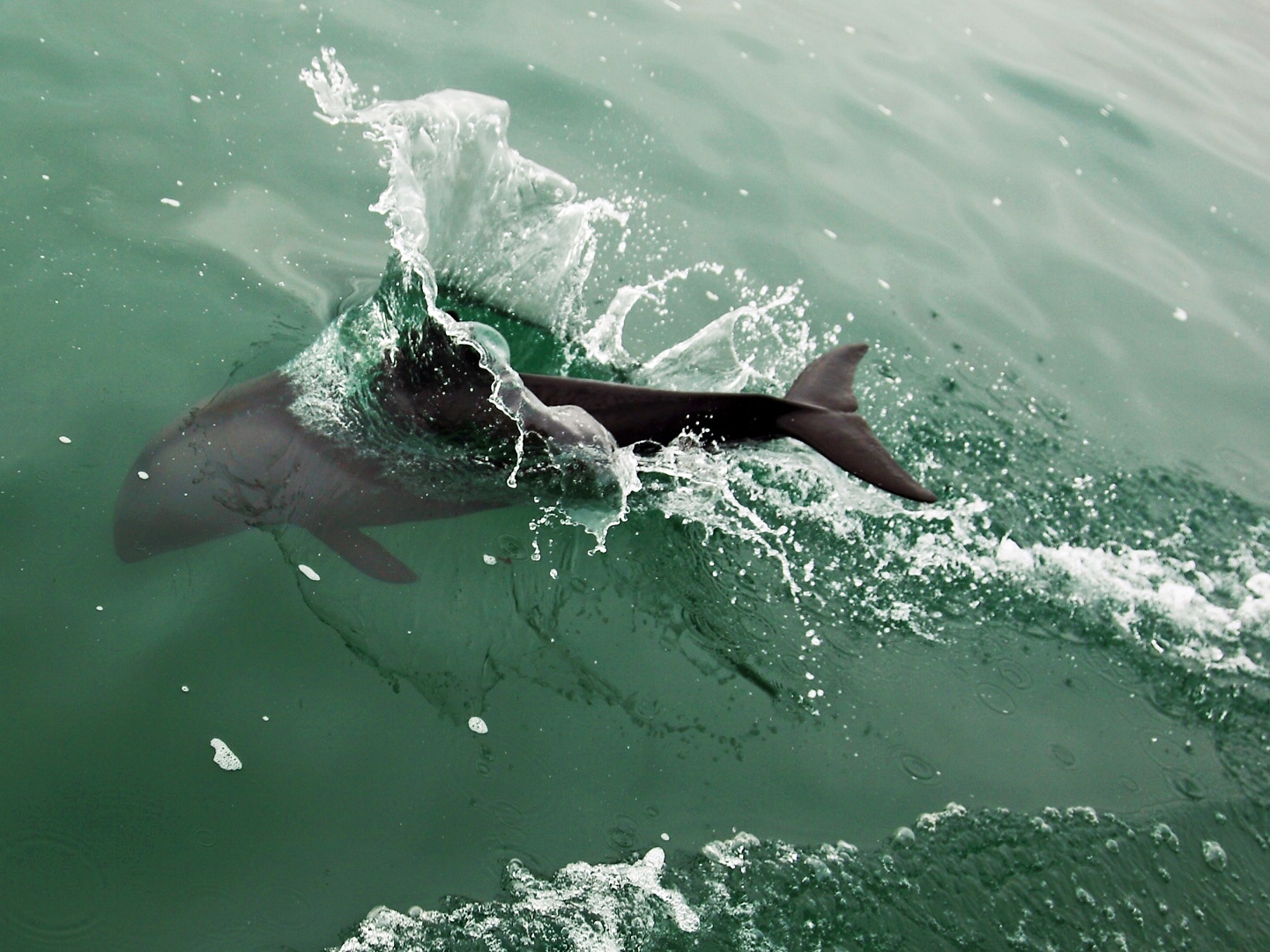 Comment: Richard Hutson – “Greg, This is a beautiful image with the dolphin splashing into the water. You captured the perfect moment with all of the dolphins visible, both in and out of the water. Nice work!”

Next is Kerrie Clarke from Australia. She’s been back in hard lockdown since the start of this challenge, and has not had any luck with trying to set up and shoot “people made splashes”. Kerrie appreciates those of you who have done it! This photo was taken between lockdowns, a time when she could get herself down to Phillip Island.

Comment: Denis O’Byrne – “Hi Kerrie. I feel for you. I am only coming out of a severe lock down and am very cautious about venturing out. I like this shot. It has feeling, mood, great depth and action. The balance and colour is good. Maybe a tad lighter in the foreground. That said if I adjusted it I could well revert to what you have posted. Nice piece of work that would look well on a wall.” 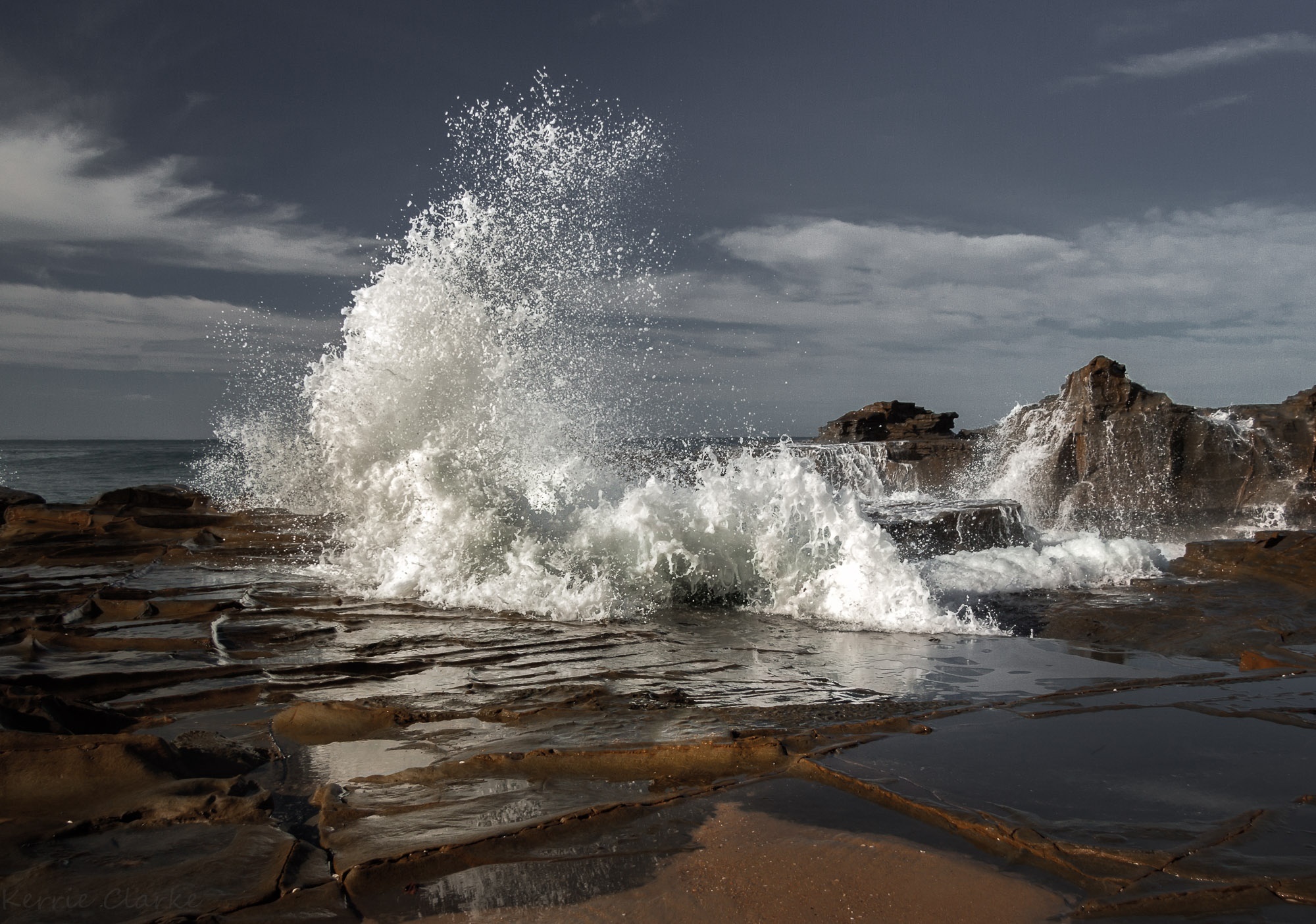 Romy Villanueva from the Philippines is last but not least. An orange in a fish tank splash. He found an old fish tank in the storage room. It’s a rather small tank, just 1 cubic foot, but good for one orange. He used two speed lights (left and right side of the tank) to freeze the splash. 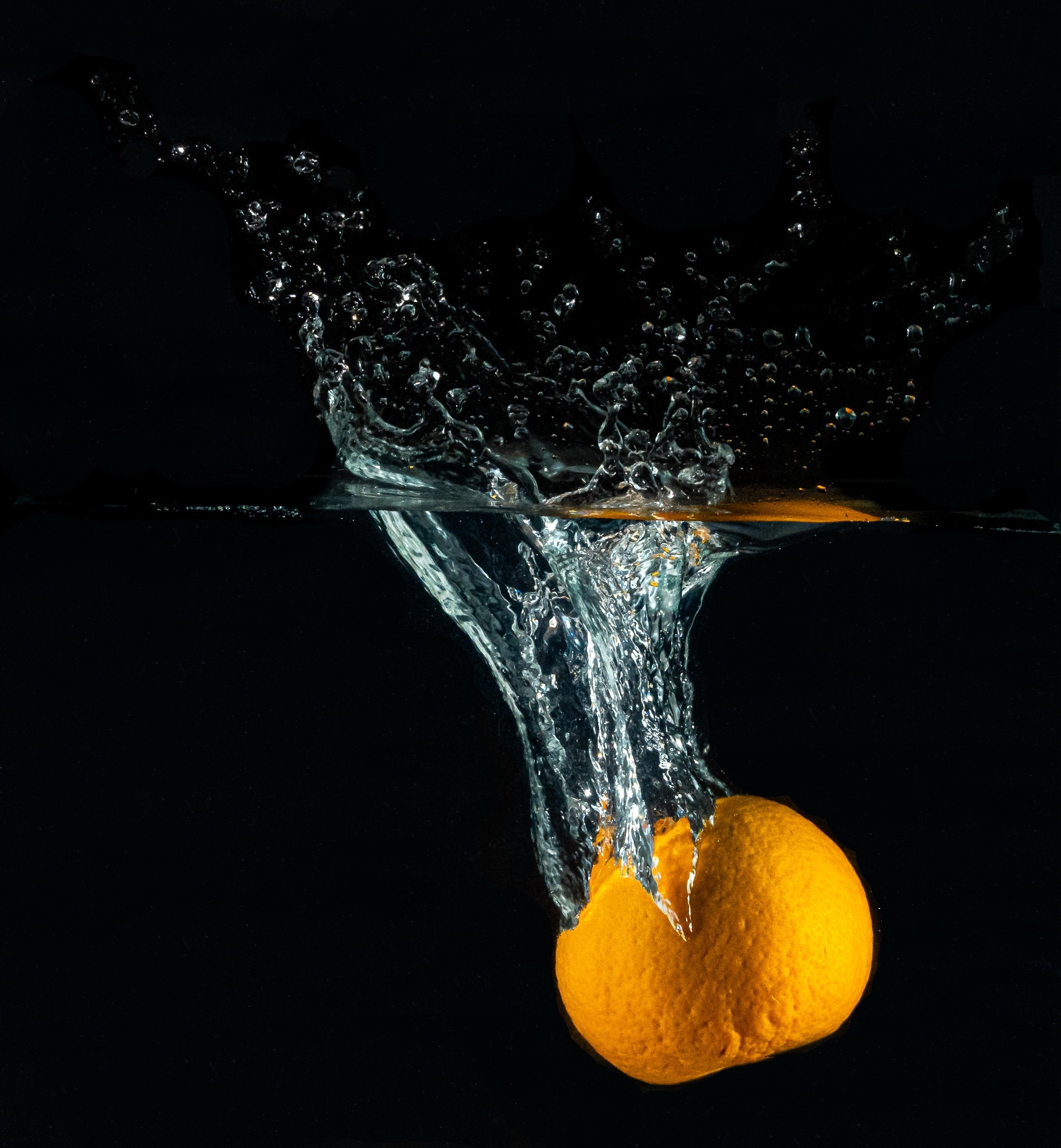 Comment: Leila Gonzalez Sullivan – “Very effective, Romy. The orange catches the eye immediately and the diagonal line with the splash gives that sense of rapid movement. It’s interesting to note the orange reflection at the water surface also.”